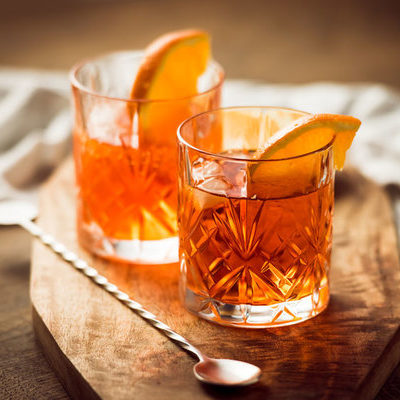 Bourbon is an American whiskey, usually made of corn mash and aged in new oak barrels. It is a distilled spirit and cannot be made anywhere outside the US.

The top bourbon brands, according to Esquire are:

The distilled alcohol known as whiskey today originated in Ireland or Scotland. Irish immigrants brought along their whiskey distilling knowledge with them to America. Some of these immigrants began to produce whiskey in the 18th century. The first distillery in the US was opened in 1783 in Kentucky.

Elijah Craig started his distillery in 1789 and later Jim Beam did the same in 1795. The name ‘bourbon’ was likely taken from the Bourbon County area in Kentucky sometime around 1840. Nowadays, this beverage makes up half of the whiskey market share in the US, and is extremely popular in the UK, Japan, Australia, Spain, and France. Australians consume more bourbon at 0.661 liters per capita than Americans, who consume 0.653 liters per capita.

Nutritional value for one shot (42g):

Because bourbon is distilled in copper stills, it contains copper, which helps in the creation of red blood cells, absorbs iron, boosts the immune system, and protects cells. It also prevents the onset of anemia and osteoporosis. This contains antioxidants in the form of ellagic acid, which has cancer-preventing properties. The drink also controls urate levels by promoting excretion of urate through urine, which can prevent gout and other uric acid diseases.

However, it is not recommended to drink bourbon in excess. Over consumption of alcohol can lead to several health problems, including affecting the brain’s functioning patterns and the body’s immune system. Liver cirrhosis, pancreatitis, high blood pressure, stroke, and different types of cancers can also result from drinking too much bourbon. The recommended maximum intake for this drink is 2 standard drinks a day for women and 3 for men, wherein a standard drink is 30 ml.

Bourbon is always produced commercially since there are plenty of regulations governing its production. It requires three basic ingredients: grain (corn), water, and yeast. The new white oak barrels are also important for achieving the correct taste.

It’s vital to remember that whiskey does not continue to mature once bottled. Open bourbon bottles will keep their flavor for about a year, although the more air in the bottle, the sooner the whiskey degrades. One can transfer the contents into a decanter or a smaller bottle for a longer shelf life. The best way to store sealed bottles is in a cool and dry place in an upright position.

Bourbon, like other whiskeys, is used extensively in cocktails, as well as in different recipes. This beverage helps make a delicious marinade due to its smoky caramel and vanilla flavor. For that same reason, it is a favorite for baking and crafting flavorful sauces. Here are a few recipes:

Whiskey does not completely fall under FDA regulations in the US, unless it is an artisanal product. Instead, whiskey production has to comply with the TTB (Alcohol and Tobacco Tax and Trade Bureau) requirements. For any whisky to be labelled bourbon, it has to be produced in the US from a fermented mash containing at least 51 percent corn. Additionally, it must not exceed 80 percent alcohol by volume and must be stored in charred new oak containers.