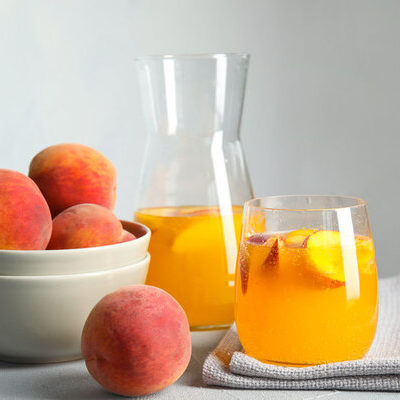 What is Peach Juice?

Peach juice is made by blending the soft and juicy peach fruit with water. Sometimes, the juice is also strained to remove the pulp and other particles. This fruit has a pinkish velvety skin and white or yellow interior. It is a summer fruit, which has a sweet taste and aroma.

Some common ways to use peach juice include:

This peach was first cultivated in China. Archeological evidence of fossilized peach stones dating back to 6,000 BC has been found there. The earliest texts about peaches are also from 10th century China. The peach had an important symbolic value to the ancient Chinese, as well. Peaches were part of the Silk Road trade, which brought them to Central Asia.

When Alexander the Great conquered Persia, he encountered peaches, which he took back to Mediterranean Europe. This is the reason why the Latin name for peach is “Prunus persica”, meaning “present from Persia”. Ancient Greeks and Romans both cultivated the fruit. Later on, Spanish colonization took the peach to the Americas in the 16th century. Today, peaches are found all over the world, especially in temperate climates. 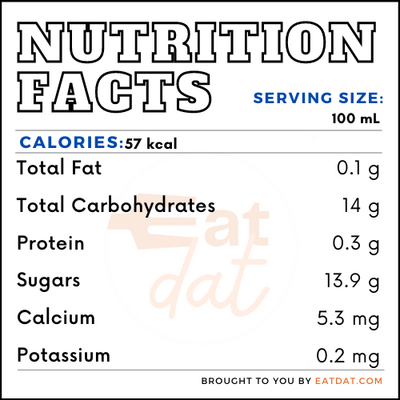 Peach juice contains vitamins A, B1, B2, and C, as well as iron, zinc, magnesium, phosphorus, and manganese in decent quantities. Drinking may help in improving blood circulation, boosting immunity, improving the digestive system, losing weight, and reducing inflammation. Peach juice is also known to have vision and skin enhancement properties. Since peach juice is pulpier, it tends to retain more fiber than most other juices. Fresh peach juice has higher antioxidants, phenolic, and anti-inflammatory properties than preserved or canned juice.

Peach juice is made by pureeing the juice rather than extracting it and then diluting it. To begin the commercial process, the peaches are carefully selected and grown to be suitable for juicing. Following cultivation, the fruits are peeled by steam peeling (steamed until the cover becomes loose) or lye peeling (sprayed with a lye solution until the cover becomes loose). Peeling is not always done, especially when pulpy juice is being produced.

Next, the peaches are heated and pulped. Then, the seeds are removed, and the pulp is filtered to remove particles. Sucrose syrup is often added to sweeten the juice further. The juice is deaerated and pasteurized. The final step is bottling and labeling this juice.

China is the top peach producing country in the world with an annual production of 12,000,000 million tons. Italy, USA, Greece, Spain, Turkey, and Iran are other major producers of this fruit. China is the biggest consumer of peaches, followed by Italy and Spain.

This fruit juice can be consumed as a beverage or used in different dishes. This juice can be used for marinating meats, cheeses, and vegetables. Also it is handy in making syrups and sauces. It can even be used to make curd or cocktails.  Here are a few recipes that use peach juice:

Peach juice must have at least a 10.5 percent concentration, according to FDA regulations. The various levels of concentration of peach juice and its labeling are also specified by the Food & Drug Administration.