Tequila, reposado tequila, blue agave, Mexico, Patrón, Don Julio, Jose Cuervo, margarita, Vino de Mezcal, mescal wine, jimadores. The blue agave plant mainly grows in the area surrounding the town of Tequila in the state of Jalisco. Due to its cultural heritage and history, this region where the agave plant is harvested was declared a UNESCO World Heritage site.

According to Esquire, the top 12 brands to drink are:

The Aztecs were already consuming a fermented drink called pulque made from the agave plant in 200 AD. This plant was very important to the Aztec culture as it was seen as the personification of the goddess of fertility Mayahuel. Spanish conquistadors would encounter this drink in 1519 when they invaded Mexico, although they were not fans of the beverage. The Spaniards would later distill the beverage to make ‘Vino de Mezcal’ or mescal wine, thereby creating tequila. By the 1600s, Don Pedro Sanchez who is revered as the “The Father of Tequila” would open the first large scale distillery in Jalisco.

In the 1700s, the famous Cuervo family would begin commercially producing this liquor, too. The Sauza family would follow in the 1800s and receive credit for discovering that blue agave was ideal for this drink. At the start of the 20th century, this distilled spirit was given its official definition, differentiating it from mescal. The 21st century would see the worldwide popularity of this distilled spirit with more people drinking it than ever before. Today, tequila consumption is at an all-time high with many countries around the globe importing this drink for their cocktails.

While this liquor is known for crafting delectable drinks, it also adds complexity to a variety of dishes. You can use tequila to marinate meat or vegetables, create glazes or syrups, and infuse just about anything. This distilled spirit is commonly used to add a punch of alcohol to sweets like sorbet or whipped cream. If you’re planning to barbecue or grill anything, the smoky flavor in a reposado can also complement those dishes very well.

As with many other types of spirits, tequila should always be consumed responsibly and in moderation. Nonetheless, this alcohol on its own has no sugar, no carbohydrates, and is low in calories. A 1.5 fluid ounce shot of this distilled spirit can contain: 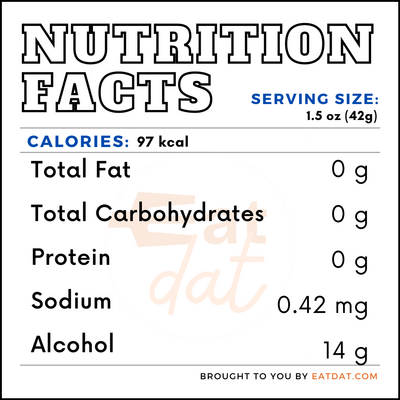 Compared to some other varieties, this alcohol is often considered healthier than other spirits. A study from Harvard even found evidence to suggest that consuming this liquor might be beneficial for your bone health.

The commercial production of this distilled spirit only happens in Mexico as the country has exclusive rights to it. The process begins with workers called jimadores harvesting blue agave plants by hand using a sharp hoe-like tool. Tequila is only made from the heart of the plant also known as the pina because the green leaves are too bitter. The workers frequently measure the starch and only send pinas to the distillery if the levels are considered sufficient. The heart of the plants is quartered and sent to an oven to bake for 79 hours, thereby converting starch to sugar.

Once baked, the fruit is shredded and crushed to make nectar that is then sent to tanks to be fermented. In the tanks, yeast is added to begin the fermentation process and the mixture is left for 72 hours. After that, the fermented mash and nectar are sent to the distillery to be condensed into a more potent liquid. This liquid becomes tequila after two distillation cycles and is then strained, diluted with purified water, and bottled. When the bottles are full, they are corked by hand, labeled, and stored until they are sold.

Tequila can craft a strong mixed drink, flavor meats, and give veggies a nice kick. Although this liquor is best enjoyed when it’s stored properly, which means keeping it cool. Distilled spirits should be stored at room temperature away from light and heat. Liquor also needs to be stored standing up to avoid disintegrating cork tops overtime.

This renowned liquor can be used in cocktails, as well as cooking. Here are some popular recipes.

The FDA has an agreement with The Alcohol and Tobacco Tax and Trade Bureau (TTB) which oversees and regulates hard liquor and spirits. Their standard of identity for tequila is a spirit distilled in Mexico “from a fermented mash derived principally from the Agave Tequilana Weber (“blue” variety)”. The definition goes on to add that the alcohol must have the aroma and characteristics generally attributed to this distilled spirit. To be considered tequila it must be bottled at not less than 40% alcohol by volume (80 proof)”.