Do Preservatives Make It Hard to Get Nutrients Out of Food?

Preservatives are used to maintain desired product sensory attributes and extend product shelf life by preventing the process of oxidation and bacterial growth. Typically preservatives are categorized in one of two ways; man made or natural.

Natural preservatives include the following:

Man made preservatives are often criticized for potential negative health impacts such as impeding gut health and nutrient absorption. While the science is continually developing, understanding the role of bacteria in the gut and reflecting on known inhibitors of nutrient bio availability can help to shed light on the potential impact of preservatives on nutrient absorption. According to their purpose in extending shelf life, preservatives prevent bacteria. Which sounds like a good thing, and it is to a certain extent. One could easily infer how excessive consumption of processed foods with synthetic preservatives could reduce performance of nutrient absorption. In terms of bio availability, micronutrients such as vitamins and minerals vary greatly in absorption during digestion based on external and internal factors. How the food is prepared, what foods are consumed at the same time, environmental stressors inhibiting proper digestion, all play a role.  To truly understand the impact of preservatives and nutrient absorption, each preservative would need to be tested in a variety of experimental design including such factors. In some cases, additives such as folic acid used to fortify cereals are usually more bio available and should be consumed to complement foods like leafy greens that naturally contain folic acid, though less bio available.

Additionally, according to the United States Food and Drug administration (FDA) and the Michigan State University Center for Research on Food Safety, the anti-microbial properties of man made food preservatives prevent our digestive systems from exposure to harmful microbes including bacteria, yeast, and mold associated with potentially-fatal food borne illnesses. Considering the amount of preservatives one would have to consume to see a negative impact, the protection preservatives the FDA deems Generally Recognized As Safe (GRAS) provides from such harmful microbes causing food borne illnesses can be viewed as doing more good than harm. In the words of Natalie Allen, professor of Biomedical Sciences at Missouri University, “Testing preservatives and assessing their safety is an ongoing process for scientists. As we learn more, information evolves.” In short, it is safer to consume foods with preservatives in moderation rather than risk eating foods infected by bacteria and fungi especially considering the lack of evidence that preservatives remain in their original form to cause harm in our guts.

Miller, John. (2016). Impact Of Preservatives On The Body. Retrieved April 28 2020 from <https://medium.com/invironment/impact-of-preservatives-on-the-body-eede56dfd44f>. 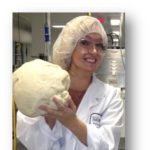 Kianne is a Food & Bakery Scientist with 7+ years of experience in the industry supporting brands such as DiGiorno pizza, Toll House cookie dough, and Buitoni pasta. Kianne holds a B.S. in Bakery Science and Management from Kansas State University, and a Masters in Business Administration from the University of Kansas.