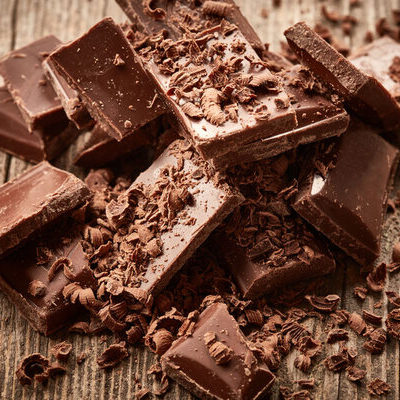 Chocolate is a food made from roasted and ground cacao beans. This food can be found in the forms of liquid, paste, or solid bars or blocks. Chocolate can be consumed on its own but is often mixed with other ingredients such as candies, nuts, and dried fruits.

The top 10 most popular brands in the world are:

This food dates back centuries to around 1500 BC when the Olmec people were consuming chocolate as a ceremonial drink. This ancient civilization passed their knowledge of cacao onto the Mayans who consumed, celebrated, and used it for important transactions. The word originates from the Mayan word “xocolatl” which means “bitter water” and referred to the thick, foamy beverage made from cacao. This food remained incredibly important in Mesoamerica and by the 15th century, the Aztecs were using it as a currency. Spanish colonizers who later came to the area would be greeted with this drink and take it back with them to Europe in the 16th century.

This beverage became so popular that it was even fashionable in the Spanish court and commonly used as medicine. However, its bitter taste led many to experiment with it and in 1828 a Dutch scientist discovered how to make chocolate powder. This would pave the way for the invention of the first chocolate bar in 1847, after which European companies such as Cadbury and Nestle would begin to spring up. However, the majority of the world’s cocoa beans are grown in the Ivory Coast, Ghana, Ecuador, Cameroon, and Nigeria. Today, this sweet remains a worldwide sensation that is enjoyed in various forms and flavors.

This sweet is a versatile ingredient that can be combined with just about anything to make a delectable dish. Some common ways to use this food include cakes, cookies, muffins, sweetbreads, pies, pancakes, and many other baked goods. When melted, this sweet can be used for dipping, topping, or to craft a variety of candies or candy bars. Not to mention, it’s very popular in cocktails or liqueur such as crème de cacao. Additionally, this food can be used in savory dishes, for instance, chili or mole.

The nutritional value of this food depends on the variety and manufacturer. One ounce of milk chocolate may contain:

While it is less popular, dark chocolate is considered the healthiest variety of this food as it contains fewer added sugars. It also contains plenty of antioxidants and may provide health benefits, such as decreasing blood pressure, reducing bad cholesterol, providing anti-inflammatory effects, minimizing insulin resistance, and improving brain function. Nonetheless, there are some risks associated with consuming dark varieties of this food, which stem from the flavanols present in cocoa solids, as well as the higher levels of fat it contains.

The commercial production of this sweet begins with cocoa beans that are sorted to filter out twigs, stones, and any debris. Then, the beans are heated to loosen their shells before they have their shells removed by a series of machines. What’s left is the cocoa nib, which is roasted to create different flavors and combined with cocoa butter and sugar. If milk chocolate is being made, then milk powder is also added to the mix before it is blended together until it reaches the texture of cake batter.

After that, this food is refined and turned into a fine powder before being sent to be liquified again in a conching machine. Next, more cocoa butter is added to reach the correct viscosity. Different products are molded using special machines that pour it out into the right shape before a conveyor belt carries them away to dry in a cooling tunnel. The finished product ist sent through a metal detector to ensure food safety before they are packaged and stored until ready to be sold.

This sweet treat is beloved by many, so it’s no surprise that you’ll find it in a variety of baked goods and desserts. However, to enjoy this food to the maximum you should always ensure that it’s stored at a cool temperature. The ideal temperature for chocolate is somewhere between 65-68°F. Furthermore, it’s important to keep it away from excess heat or humidity, as well as air since they can damage the texture of this food. It’s recommendable to store this sweet in an airtight container and consume it as quickly as possible to ensure optimal flavor and texture.

This sweet can be enjoyed in a plethora of ways. Here are some popular recipes:

The Food & Drug Administration has strict regulations concerning this food and has standards of identity for various types of this food including sweet, white, buttermilk, and skim milk. Foods that contain cacao may be labeled “chocolate flavored” but for a product to include the label “chocolate”, it must contain chocolate. This product can also be considered a baking decoration when used to decorate cakes, cookies, and other desserts. Furthermore, the FDA regulates which emulsifiers, as well as pH control agents and acidulants, may be used in these products. They also inspect any imported products to determine whether they’re safe or should be withheld from sale.