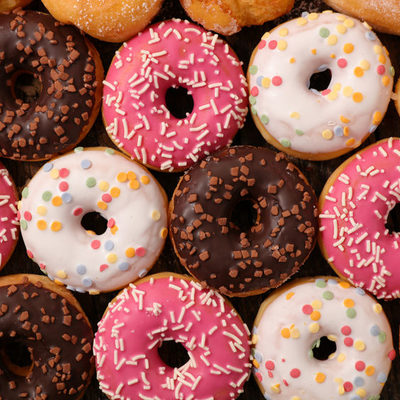 What is a donut?

A donut or doughnut is a sweet confection made of fried dough commonly eaten for breakfast or dessert.

Yeast raised donuts are more popular as fresh offerings, while cake donuts are better for shelf life longevity. This sweet pastry even has a holiday, celebrated on the first Friday of June every year. In the United States, over 10 billion donuts are made each year.

The top 9 best donut chains in the US, according to The Daily Meal are:

As a food that has left traces all over the globe, the exact origin of this pastry is not entirely clear. However, in the 1800s the Dutch were making olykoeks—a ball of cake stuffed with fruits or nuts and fried in pork fat. In 1847, a ship captain named Hansen Gregory punched a hole in these “oily cakes” and invented the donut. Later in 1898, a German immigrant named William Entenmann opened the first bakery in Brooklyn and delivered pastries, including donuts, door-to-door. This fried pastry didn’t reach its famous status until the end of World War I when it was served to soldiers and volunteers alike.

By 1920, an entrepreneur named Adolph Levitt invented the first automated donut-making machine. At the Chicago World’s Fair of 1934, this sweet treat was promoted as “the food hit of the Century of Progress.” A few years later, Krispy Kreme was already manufacturing this pastry to sell in supermarkets across the country. In time, the recipe continued to evolve and in the 1970s the chocolate-covered cake donut was born. Today, you can find America’s favorite pastry just about anywhere in a plethora of varieties, flavors, and sizes.

While these doughy treats can brighten up any morning, indulging in them too much can pile on the pounds. A plain cake donut has: 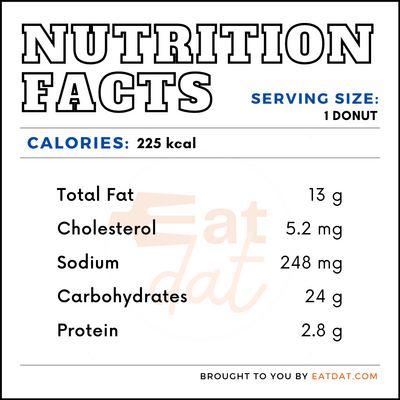 Cream filling, glaze, and other toppings will only increase the caloric values of this sweet treat. Nutritionists recommend cutting down on fried pastries to maintain a healthy diet and avoid heart disease, high blood pressure, and diabetes.

The commercial production for cake and yeast donuts varies between the types. For the cake variety, the ingredients are mixed to create a batter that is poured into a machine. This machine shapes the pastry and then drops it into hot oil to fry. Frying only lasts for a minute and a half, then the donuts are left to cool before being decorated and then packaged or served.

The yeast variety requires more time to prepare. After being mixed, the yeast dough is laid out on sheets and sent through a series of rollers to be flattened. The flattened dough is seasoned with cinnamon then rolled into a log shape, flatted again, then cut into discs. These discs are sent to a proofer to rise before they are fried evenly on both sides and glazed. The excess glaze is blown off as the donuts cool and eventually make their way to be packaged and stored until shipping. 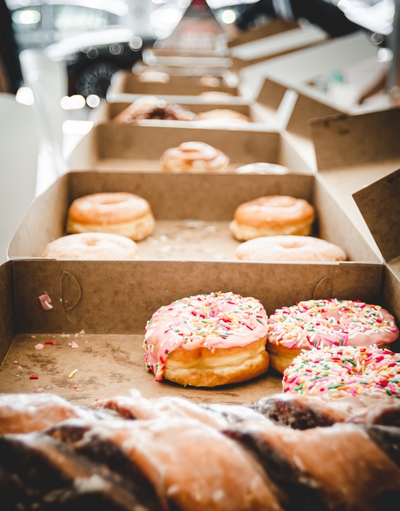 Here are some popular varieties of this sweet pastry.

Donuts are tastiest when they are hot and freshly baked, but leftovers can be just as nice. To keep this pastry from going stale, you must store them correctly. When this pastry is cream-filled, it should be stored in the refrigerator and kept for only 3-4 days. Keeping it in the freezer can increase that time up to three months. Cake and glazed donuts can be stored at room temperature in an air-tight container. You can also place these in the refrigerator or freezer if you don’t plan to eat them the following day.

This sweet pastry is a breakfast time favorite. Here are some popular recipes.

The Food & Drug Administration requires that any companies producing donuts follow their labeling regulations. Labels must include serving sizes and reference amounts for each distinct piece. The FDA also requires that food establishments that serve these pastries declare the calories for each flavor or variety.