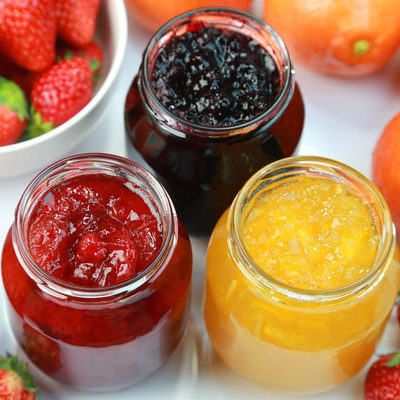 Jam is a mixture made of fresh, frozen, canned, or concentrated fruit and sugar that has been left to congeal. This food is often used as a spread, topping or filling for breakfast foods and deserts alike. The difference between jam and jelly is that the former uses the whole fruit while the latter only uses fruit juice.

According to Statista, the top 5 most popular flavors are:

Since natural sweeteners such as sugar and honey were abundant in the Middle East, many believe that this is where jam was born. An ancient book from the late 4th century called De Re Coquinaria (The Art of Cooking) had the first known recipe for fruit preserves. Europe would not have access to sugar until after the Crusades. In the 11th century, sugar became available in Western Europe, and this food spread like wildfire. As jam-making made its way across the continent, it would also lead to the creation of marmalade in 1561.

The high cost of sugar meant that this food would long be something that could only be enjoyed by the wealthy. In fact, King Louis XIV often finished his royal feasts with platters of jam made fresh from his garden. In the 1800s, fruit juice production began in the United States which led to Dr. Thomas Branwell Welch launching his own company. By 1918, Welch’s released their first fruit jam product, which would soon become a national sensation. In the 1970s, the rise in sugar prices would lead to many companies switching to high fructose corn syrup which is still common to this day.

This is commonly used as a sweet spread for bread or a topping for various breakfast foods. However, this food can be used in a variety of ways when it comes to baking. You can use this food as a sweet filling for pies, doughnuts, or layer cakes. Add a dash of sweetness to cheeses such as brie with this fruity food. You can even save yourself time by blending up a quick fruit smoothie or adding color to cake icing with jam.

While fruit is known for providing plenty of vitamins and nutrients, jam is far more sugary than fresh fruit. One tablespoon of this food can contain 50 calories, as well as 13g of carbohydrates of which 12g are sugar. Although it does have some trace amounts of Vitamin C, this food is not the best way for people to obtain their vitamins. It’s recommended to enjoy this food in moderation to reduce the risk of developing diabetes or heart disease. 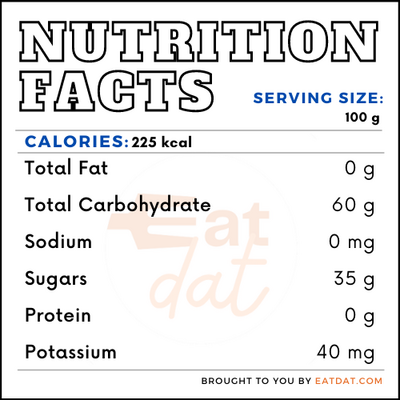 Later, pectin is added to give the mixture a jelly-like texture, as well as juice. The entire mixture is cooked down further to achieve the right consistency for this food. Workers then check the sugar level of the mixture and, if it is up to standard, it is sent off to be bottled. The jam is then bottled, capped, refrigerated, labeled, and stored until ready to be shipped.

The way that jam is made automatically gives it a longer shelf life than some other foods. Nonetheless, there is a proper way to store this food to ensure that you can enjoy it for longer. This food should be stored in a cool, dry place away from light and heat. It’s recommended to consume this food within 12 months of opening it, but also consider the ‘best by’ date on the label. For your safety, you should throw away any jam jars that have mold growing on top.

Crafted from a variety of fruits, jam has made its way into many desserts. Here are some popular recipes.

The Food & Drug Administration defines jam as a semi-solid food composed of fruits and fruit cannot be less than 65% of the finished product. In this regulation, the FDA goes on to provide a standard of identity for this food. If the food is made using one fruit it is simply a preserve or jam. However, if it is made with two to five fruits, the label must indicate that it is a “mixed fruit” product. There are two groups for this food depending on the fruit used, as well as whether the ingredients are fresh, frozen, concentrated, or canned.