What are Jelly Beans?

Jelly beans are small bean-shaped candies that have a soft and gummy interior and a hard exterior. This candy is made from sugar, flavoring, and often covered in shellac to give it a smooth texture and shine. Jelly beans are commonly consumed around Easter time, but this trend only began in the United States around the 1930s.

The top 5 most popular jelly bean brands include:

These candies are believed to have originated from the Turkish Delight, a regional treat that had been around for a long time, but only got a hard shell in the 17th century. However, the process of “panning”, or giving sweets a hard shell using syrup and sugar, had been in use since the 15th century in Europe. In 1861, an American candymaker in Boston named William Schrafft began making a sweet treat with a hard shell and soft interior. Schrafft recommended that people send these “jelly beans” to husbands and brothers in the Union Army. Not long after, these beans would become a popular penny candy.

In 1905, the word ‘jelly bean’ could be found in Webster’s Dictionary and by 1915 it became a slang word for a “worthless male”. It was later in the 1930s, that this sweet treat became associated with Easter, due to its shape somewhat resembling an egg. These candies continued to grow in popularity and would continue to blossom when in 1965 the Herman Goelitz Company began to experiment with flavors. These bean-shaped candies would become even more well-known when President Reagan announced his predilection for them and invented a new flavor. Today, jelly beans remain a beloved American candy, which are enjoyed by people of all ages.

Jelly beans are sweet treats which can be very high in sugar. A single serving (around 14 beans) contains: 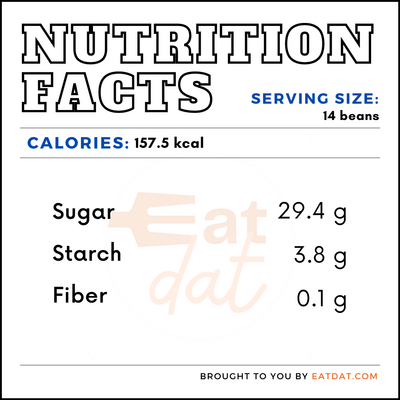 These candies do not offer any vitamins or minerals. Consuming too many of these beans can result in a high sugar intake, which can lead to poor heart health and weight gain. While they seem small and unassuming, it’s best to consume this food in moderation.

The commercial production can take between 7-21 days. To begin making these little candies, first, the liquid sugars and flavorings are heated and combined with glucose and starch. Then, this mixture is poured into bean-shaped molds and left to harden overnight. The following day, the starch is removed from the beans and then they are sent through a steam bath and sprayed with sugar.

Next, the beans undergo “panning” where they are placed in rotating drums which spin while flavors and colors are added. After that, to create the bean’s hard shell, grains of sugar are poured in. Finally, wax and hot syrup are poured in to give the jelly bean a shine. The beans are then given time to dry before they are packaged and shipped off for sale.

Jelly beans can add a splash of color and a world of flavor to sweet treats. Although to enjoy these candies to the fullest, you should take care to store them properly. Most beans have a long shelf life and can last between 1-2 years, when unopened and stored at room temperature. If the packaging is opened, then the lifespan of these candies will be less, depending on the brand. However, it’s safest to follow the “best by” date on the package.

The Food & Drug Administration regulates the labeling of all foods in its Code of Regulations. In order to be in compliance with FDA regulations, commercial producers of jelly beans must include the serving size, reference amount, nutrition value, ingredients, and other necessary information. In 1994, the FDA introduced what became famously known as the “jelly bean rule” when they stated that a food item could not be considered “healthy” unless they provided at least 10% of the Daily Value of certain vitamins and minerals. This rule was intended to keep companies from making health claims for chewing gum, soft drinks, and other foods and beverages.