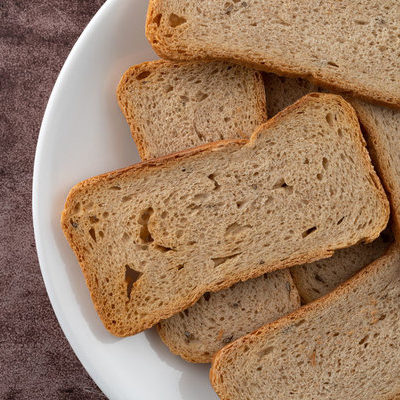 What is Melba Toast?

Melba toast is a thin, crispy toast often served with toppings or soup and melted cheese. This savory treat is different from regular toast as it is toasted twice. This toast is consumed in countries all over the world in a variety of ways.

The top 4 best-selling brands, according to Amazon are:

The national Melba Toast Day in the US is March 23rd. In 2002, an American study showed that toasted bread was served as the main meal constituent in 31% of breakfasts across the country.

This toast was created in 1897. The meal was named after Australian opera singer Dame Nellie Melba, whose actual name was Helen Porter Mitchell. This lady had concerns about her weight, health, and overall well-being. At one point, she went to stay in a hotel, when she discovered that the toast the hotel served was too thick. A chef named Auguste Escoffier made a special toast for her.

This new toast was dry, thin, and crispy. Reports say that the hotel proprietor named the toast after Nellie Melba upon speaking with the chef. At that time, the chef also came up with the Peach Melba, a dessert made from peaches and raspberries. Later on, in 1925, the Mayo brothers made melba toast famous and prescribed it to an actress named Ethel Barrymore. This food is still a popular and healthy treat for many people today.

In a serving size of six toasts, there are: 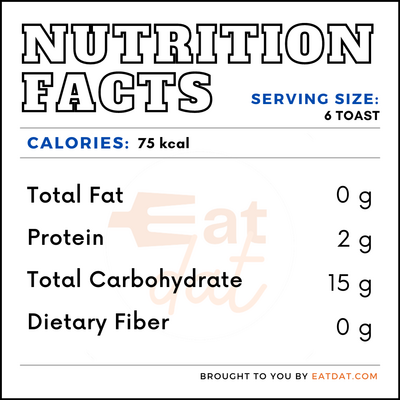 This food is a healthy snack that you may want to include in your weight-loss diets. It can satisfy your hunger and help lower your calorie count. That’s because it supplies less than 100 calories when consumed in a fair amount.

The large-scale production of this food revolves around the toasting of many thin bread slices. On one end, a machine consistently receives bread slices and releases the toast on the other side. Also, the toasting plates should be greased before slices of bread reach them. The machine should toast the bread until brown and crispy without burning it.

In a basic form, melba toast is very simple to make. All you need is bread and butter. It would be best to get thinly sliced bread from the beginning, as this will save you the stress of slicing and toasting twice. Follow these steps to make this snack at home:

The best place to store this snack is in an airtight container. This way, it can last for a couple of days.

This is a snack that you can prepare any way you like. People add fruits, salad, cream, eggs, and other ingredients to this food. Here are a few recipes you can try in the kitchen:

The Food and Drug Administration has regulations concerning the reference amount of melba toast consumed per eating occasion. The FDA provides this data using information from nationwide food consumption surveys conducted by the USDA. Manufacturers of this snack are required to convert this reference amount into the labeling size in a household measure.