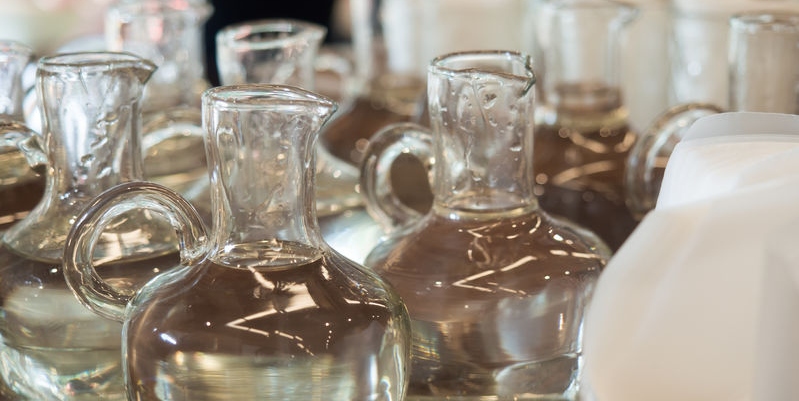 High Fructose Corn Syrup (HFCS) is a sweetener just like sugar or honey. All three of these sweeteners are composed of glucose and fructose at a similar ratio. High fructose corn syrup’s name is a way to distinguish it from regular corn syrup which is solely glucose.

Corn syrup is converted to HFCS by enzymes which transform glucose into fructose. Fructose is a simple sugar compound that occurs naturally in fruits and berries. Not all the glucose is converted to fructose and HFCS is available either in 42 percent or 55 percent fructose.

HFCS 42 is primarily used in cereals and baked goods and HFCS 55 is used in soft drinks. It enhances the flavor of fruits in beverages and helps with the browning of bread. Besides having many practical sensory benefits in the food industry, it is a free flowing liquid syrup which is convenient for food manufacturers to use in recipes.

The key difference between sugar and High Fructose Corn Syrup.

Sugar and honey are the sweeteners commonly found in people’s homes, while HFCS is not. It  is seen as an ingredient in processed foods. People are suspicious of processed foods and think HFCS has more fructose, is sweeter than sugar and is therefore more addicting. It is untrue that HFCS is sweeter than sugar. As mentioned previously, HFCS is similar to sugar in composition of glucose and fructose.

Then, why am I being told that High Fructose Corn Syrup is bad for me?

Until 2004, HFCS had existed as a safe and essentially non-controversial product for about 35 years. Then, in 2004, there was a published commentary suggesting a potential link between HFCS consumption and obesity. They suggested that HFCS fueled the obesity epidemic. The evidence they presented included an increase in consumption of HFCS and data on the digestion and absorption of fructose.

This article’s intent was to be a commentary, but since it was published at a time when there was public alarm about the rising rate of obesity, it was misunderstood.

But, HFCS makes you fat, right?

HFCS is an ingredient found in many unhealthy foods and caloric drinks. Over consumption of unhealthy foods and calories has been steadily increasing for decades. But, there is no specific evidence that HFCS is linked to weight gain more than any other sweetener. Health officials in the United States support the 2010 Dietary Guidelines for Americans which recommend everyone limit consumption of added sugars, including all sweeteners, such as HFCS, sugar, and honey.