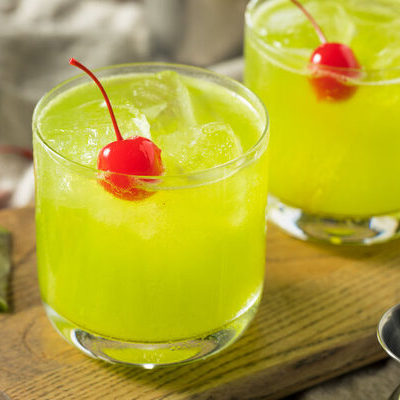 What is Melon Liqueur?

Melon liqueur is a muskmelon flavored liqueur that originated in Japan. It is also known as ‘Midori’, which is Japanese for ‘green’, since the liqueur has a vibrant bright green color.

Midori is also the brand name of the lemon liqueur produced by Suntory. However, it remains the best known and most popular of all melon liqueurs and the brand denotes the product.

The most popular melon liqueur brands are:

Midori started life as Hermes Melon Liqueur in 1964. It was produced by the Japanese beer and whiskey company, Suntory. In 1971, it won the IBA Cocktail Championship in Tokyo. In 1978, it was renamed as Midori and was launched in the US at a time when no fruity liqueurs existed in the country. The launch took place at the Studio 54 nightclub in New York.

John Travolta was one of the first people to try out this liqueur in the US. Later in the year, The Universe, a cocktail that included Midori as a main ingredient, won first prize in the annual competition of the United States Bartenders’ Guild. Suddenly, Midori had become a household name and became synonymous with melon liqueur. This liqueur remains well-known to this day.

One serving of midori:

It has 21 percent ABV and lacks any substantial nutrients. Consuming too much melon liqueur can lead to several health problems, such as increased risk of heart disease, liver cirrhosis, pancreatitis, high blood pressure, stroke, diabetes, cancer, as well as obesity, depression, and aging. However, consumption of melon liqueur in moderation might bring some benefits such as decreased incidence of cardiovascular disease, hypertension, diabetes, and certain types of cancer.

Midori is made with two types of melons: muskmelon and yubari melon, sourced exclusively from Japan. The melons are harvested in the summer and an orange-coloured pulp is prepared from them. This pulp is then frozen to maintain its freshness. During production, the frozen pulp is left to defrost naturally. Then, a yubari infusion and yubari distillate are produced from it, both without any fermentation.

An enzyme is used to break down the fiber, then neutral spirits and sugar are added. The distillate is made separately by mixing the pulp, spirit, and water in a low-pressure still. Next, yubari and muskmelon infusions are both added to the distillate. After that, the production process is completed in Mexico and France, where the concentrate is blended with cane sugar and brandy. Finally, green food coloring is added.

Midori must be stored in a cool and dark place, away from direct sunlight. An open bottle will begin to evaporate and lose flavor, so it is best to store it in optimum condition. When stored correctly, this liqueur can be kept indefinitely.

Midori is extremely sweet and, therefore, suitable for cocktails. For this same reason, it is not served neat or as a shot. Here are some popular melon liqueur recipes to try:

All alcohol-related products are regulated by the Alcohol and Tobacco Tax and Trade Bureau (TTB) in the US. Liqueur is defined as flavored spirits mixed with fruits, flowers, plants, or juices. There is no specific standard of identity for melon liqueur or Midori. Midori was exclusively produced in Japan until 1987, although today, it is produced in Mexico and France.

Made in Japan: New Directions for Midori, Bar Magazine, https://barmagazine.wordpress.com/2011/11/01/made-in-japan-new-directions-for-midori