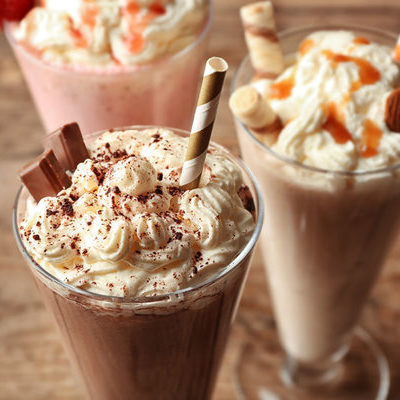 What is a Milkshake?

A milkshake is a cold drink made with milk, to which ice cream, as well as different flavors and ingredients may be added. The name derives from the fact that the milkshake is served frothy by shaking or mixing it thoroughly.

The top 10 most popular milkshake flavors are:

In the 1800s, this creamy beverage was originally considered an eggnog made with whiskey. The first mention of a milkshake appeared in 1885. Within 15 years, the whiskey was gone and the modern milkshake with all its different flavors was born. However, these milkshakes were still shaken by hand. Hamilton Beach would later invent the drink mixer in 1911, which would aid in the development of this beverage.

In 1922, Steven Poplawski invented the blender and Ivar Coulson added vanilla ice cream to the malted milk drink at Walgreens. Within a decade of these two developments, modern milkshakes with ice cream and syrup were in vogue. When refrigerators became common in most households in the 1930s, milkshakes also became easy to store. Today, milkshakes are a popular food around the world and there are hundreds of different flavors to choose from.

Most restaurants use milkshake machines to prepare this beverage. This saves both time and money, as well as increases their profits. To craft this drink, all the ingredients are added to a cup. Then, the cup is screwed into place and the ingredients are blended. The basic recipe has a milk to ice cream ratio of 1:2 that can be enhanced to include different flavors, fruits, nuts, candies, and other ingredients.

The top milkshake maker brands are:

One serving (474mL) of milkshake contains: 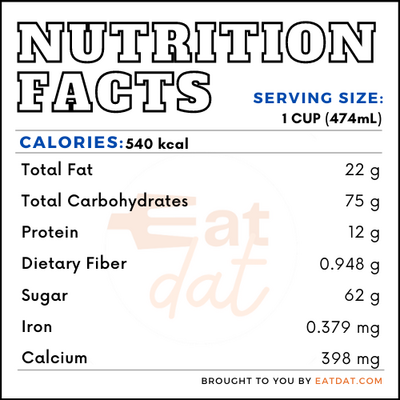 Milkshakes contain milk, which is a good source of protein and calcium, as well as a host of micronutrients, including phosphorus, magnesium, sodium, potassium, and sulfur. They also contain ice cream, a source of healthy fats, as well as copper, cobalt, iodine, manganese, zinc, fluorine, molybdenum, and selenium. Fruit milkshakes contain a number of micronutrients, depending on which fruit is used. Nonetheless, many versions of this beverage have high levels of sugar and fat, which can lead to health problems. Therefore, it’s best to consume this beverage in moderation.

Milkshakes are versatile and can be easily made using a variety of different ingredients. Here are a few recipes to get started.

The Food & Drug Administration stipulates that one milkshake serving should be 240 ml. The FDA also defines ice cream as a food produced by stirring and freezing dairy ingredients. Ice cream must contain at least 1.6 pounds of solids to the gallon and must have at least 10 percent milk fat. The FDA strictly regulates the other ingredients, including flavorings, that ice cream may contain.

In addition, milk also comes under the purview of the FDA, which defines it as the lacteal secretion of healthy cows. Milk must be free of colostrum and must be pasteurized. Other ingredients used in milkshakes such as fruits, chocolate, and other flavors are also regulated by either FDA or USDA.

Mason Howard, How to Use a Milkshake Machine, SF Gate
https://homeguides.sfgate.com/how-to-use-a-milkshake-machine-13409433.html