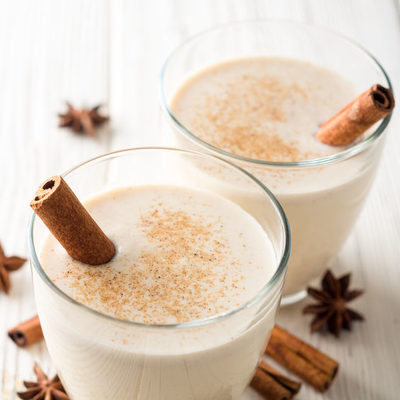 Eggnog otherwise known as milk punch is a sweet drink made from a dairy base and mixed with eggs. Traditionally, this beverage contains milk, whipped egg whites, egg yolks, cream, and sugar or sweetener. It is common to add distilled spirits such as rum, brandy, whiskey, or bourbon to eggnog for added flavor.

The top 10 brands you can buy in supermarkets, according to Syracuse.com are:

This drink has its roots in a medieval British drink called a posset. By the 13th century, this beverage was commonly enjoyed by monks and was used to toast to prosperity. As ingredients such as milk or eggs were hard to come by, they were usually only consumed by people of means. In the 1700s, eggnog became popular in the American colonies as there were plenty of farms to provide its ingredients. This beverage was adopted in Mexico and Puerto Rico but adjusted with recipes like rompope and coquito, respectively.

While there is much debate, many believe that the name eggnog came from the combination of ‘egg’ and the colonial word for a thick drink (‘grog’). The name remained and this drink became more well-known with its hot variations appearing in print as early as 1818. This drink was so popular that it even caused a riot in 1826. By the 19th century, this rich beverage was associated with Christmas and the holiday season. Nowadays, people mostly consume this cheery beverage cold and only for two months out of the year.

This drink often helps people enjoy the holidays a little more but has too much fat or sugar to be considered healthy. Since it contains milk, this beverage can be a good source of calcium, magnesium, phosphorus, as well as Vitamins A and D. Nonetheless, a half-cup serving of this has: 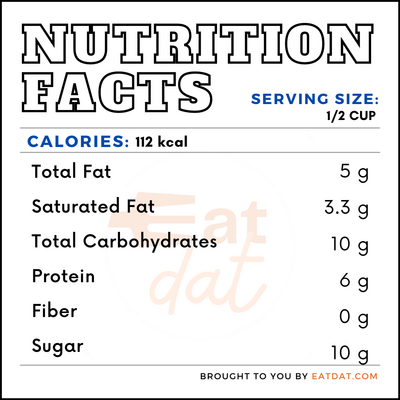 However, if consumed with alcohol such as rum or cognac this beverage can have even more calories. It is also not recommended for pregnant women or people with compromised immune systems to consume eggnog due to the presence of raw egg

As this drink is made with a base of milk, commercial production begins at a dairy farm. Dairy cows are milked to provide fresh milk that is stored in a tanker truck and transported to the factory. One truck can contain up to 5,500 gallons of milk and dairy factories can receive around 25 trucks a day during high season.

The fresh milk is first separated into skim milk and heavy cream, then mixed back together in the correct proportions. After that, pasteurized dry eggs, liquid sucrose, nutmeg, and other flavorings are added to the mixture. This eggy mixture is blended and then pasteurized before it’s packaged, labeled, and shipped off to stores.

Since this rich beverage contains both egg and dairy, you should always pay attention to its freshness. This beverage should always be refrigerated, as well as kept away from light and heat. After its ‘best by’ date, this beverage can be stored for up to 7 days.

This festive beverage has made its way into many sweet drinks and dishes. Here are some popular recipes.

The Food & Drug Administration defines eggnog as the food which contains dairy ingredients, egg-yolk ingredients, and nutritive carbohydrate sweeteners. This drink must not contain less than 6% milkfat or less than 8.25% milk solids not fat. As for the egg yolk content, it cannot be less than 1% of the by weight of the finished food. The FDA also defines eggnog flavored milk as a milk product that must contain at least 3.25% of butterfat and 0.5% egg yolk solids.

Williams, Geoff. “A Brief History Of Eggnog: Its Past, Including The Infamous Eggnog Riot, Is Stranger Than You Think.” Forbes.com, Forbes Magazine, 30 Nov. 2016, www.forbes.com/sites/geoffwilliams/2016/11/29/a-brief-history-of-eggnog-its-past-is-stranger-than-you-think/.