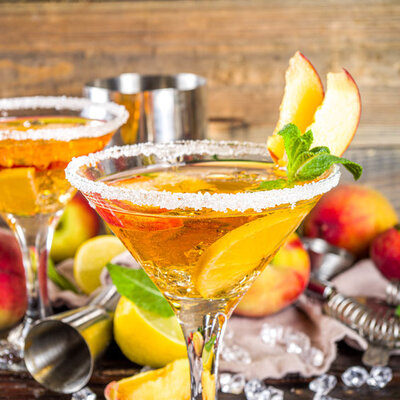 What is Peach Vodka?

Peach vodka is a type of vodka that is infused with the flavor of peaches. Different grains may be used such as rye, barley, or wheat, or other ingredients like grapes, potatoes, or even sugar beets. Though generally vodka is tasteless, odorless, and colorless, peach vodka has a distinctive sweet and tart taste. Russia is the highest consumer of vodka, followed by Poland, Ukraine, Bulgaria, and Slovakia.

The most popular flavors of vodka in the United States include:

Vodka most likely originated in 9th century Russia or 8th century Poland. At first, the alcohol by volume of vodka was relatively low at just around 14%. It was also often blended with spices and herbs in order to infuse it with a distinctive flavor. The invention of the still became popular around the 16th century and the alcohol content of vodka gradually increased. The Smirnoff brand, started by a serf called Pyotr Smirnov, finally gave rise to the modern ‘tasteless’ vodka by pioneering the method of charcoal filtration.

Isidore, a monk from Chudov Monastery, is credited with creating the first recipe for Russian vodka in 1430. Gradually, the drink spread to Europe. However, it was only in the post-Prohibition Era that vodka began to be consumed in large numbers in the US, after the establishment of a Smirnoff distillery in the 1930s. By the 1990s, consumers wanted more variety in their vodkas and companies were happy to oblige, introducing a number of flavored vodkas into the market.

Overconsumption of vodka on a regular basis can lead to several health problems, such as liver cirrhosis, pancreatitis, high blood pressure, stroke, and different types of cancers. Flavored vodka is popular among young people, but can prove to be a health hazard that has resulted in disproportionate increase in alcohol-related emergency room visits. However, moderate alcohol consumption has some benefits. Drinking vodka regularly can help in reducing heart disease. While binge drinking can be harmful, drinking a glass of alcohol three or four times a week can have beneficial health effects.

Vodka can be produced from wheat, rye, barley, potato, grape, sugar beet or any other starchy substance, based on local availability. The ingredient is selected on the basis of its starchiness and, then, fermented to produce the base spirit. Next, the alcohol undergoes a rectification, wherein all flavors and odors are leached from the spirit and increase the alcohol concentration. Sometimes, this is done more than once.

Additives like sugar, honey, glycerin, or citric acid are added to increase viscosity and smoothness. In the final stage, fresh peaches are added to the vodka and allowed to rest in order to fully absorb the flavor. It is then strained, purified, and bottled.

Peach vodka is best stored in a dark and cool place, away from sunlight. It is also not a good idea to store peach vodka in the freezer because of its tendency to lose its flavor. An unopened bottle can keep its flavor for several years. However, an opened bottle is best if consumed within two years of opening.

This fruit vodka can craft a variety of fruity cocktails. Here are a few recipes:

All alcohol products except artisanal products fall under the purview of the TTB (Alcohol and Tobacco Tax and Trade Bureau) in the US. Vodka is defined as a neutral spirit distilled with charcoal and without any distinctive character, aroma, taste, or color. Flavored vodka is defined as vodka flavored with natural flavors, with or without sugar, and having 30 percent ABV. The TTB also regulates the labeling of the vodka, which shall take the name of the predominant flavor, such as ‘peach vodka’.

Simon Difford, Vodka – How is Vodka Made?, https://www.diffordsguide.com/encyclopedia/116/bws/vodka-how-is-vodka-made