Soda is a type of soft drink that consists of carbonated water, sweeteners, flavorings, and colorings, which are often from both natural and artificial origins. This fizzy drink can include caffeine, but there are also caffeine-free varieties.

According to NBC News, the top 10 soda brands in the U.S. are:

Interest in carbonated drinks began in the 17th century in the hopes of mimicking the refreshing and healing nature of springs. Although many scientists began to study the benefits and processes behind effervescent water, soda took a long time to come to fruition. In 1767, a man named Joseph Priestly finally invented carbonated water by infusing water with carbon dioxide. Carbonation techniques developed over the following decades and by 1789 Jacob Schweppe was already selling his seltzer in Switzerland. The 1800s saw a huge increase in carbonated water production and the first patent for mineral water be awarded.

In 1835, soda was already being bottled for commercial sale in the United States. It’s not clear when manufacturers began sweetening these soft drinks, but by the 1860s they were available in an array of fruity flavors. At the end of the 19th century, root beer, Dr. Pepper, Coca Cola, and Pepsi-Cola were all available and the soda business was booming. Soda would create a large number of jobs and an entire industry over the following decades. Health concerns about sugar and caffeine would fuel reformulation throughout the 20th century but never did stifle America’s love affair with soda.

The nutritional value for 355 mL of cola: 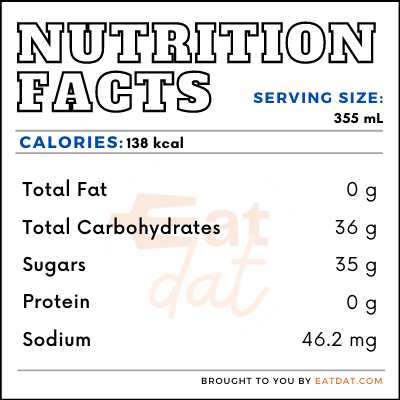 This drink can help bring flavor to many dishes, as well as improve their consistency. In cooking, this drink can be used for anything from baked goods to meats. With cakes, this beverage creates a light texture and adds a sweet flavor. For marinades, it provides sweetness to create a more complex dish.

As it’s mostly made of sugar, soda doesn’t bring much to the table when it comes to nutrition. A single can of soda exceeds the daily sugar intake recommended by the American Heart Association. Sugary drinks have also been linked to health issues such as obesity, diabetes, heart disease, gout, and poor bone health. Nutritionists recommend replacing this beverage with sparkling water, tea, or flavored water.

The commercial production of soda begins with its plastic bottles which are made new and cleaned for sanitary reasons. Once the bottles are clean, they are sent to the filling station to await the soft drink. In a mixing room, carefully measured ingredients are combined to produce soda. These ingredients include filtered water, syrup, glucose, or fructose, as well as natural and artificial flavorings and colorings.

The soda is then sent to a pressurized chamber that is injected with carbon-dioxide to give the drink its carbonation. After that, the finished soft drink is bottled and a cap is placed on the bottle to hermetically seal it. The bottles are then labeled and stored until they are ready to be shipped off to distributors.

The carbonation in soda is what makes it so fun to consume, but no one is a fan of flat soft drinks. To store this beverage properly its best to ensure that the lid is screwed on properly and the container is tightly sealed. It should also be kept in the dark, away from light at a temperature between 35°- 54°F (1.7 to 12.2oC). Concentrated drinks, such as Coca-Cola and Fanta, can be stored at a wider range temperature like 32°- 68°F (0 to 20oC). While you don’t have to store soda in the refrigerator if there’s no space, it’s best to avoid sudden changes in temperature.

This fizzy drink can cool anyone down on a hot day but is also great for creating in the kitchen. Here are some popular recipes.

The Food & Drug Administration regulates soda to ensure that they are safe to consume and accurately labeled. Companies producing soft drinks must only use additives approved by the FDA and indicate any contact substances. When it comes to labeling, these beverages must include the name and address of the manufacturer, ingredients, net quantity, and chemical preservatives. The FDA repealed the standard of identity for soda in 1995 because they felt that other regulations in place were adequate enough.