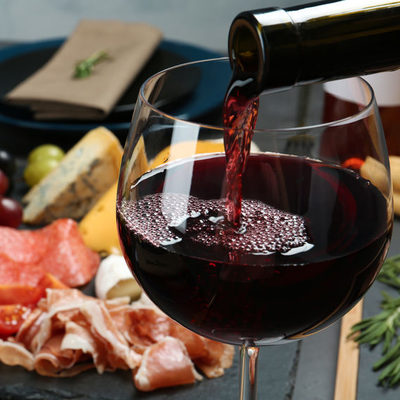 Wine is an alcoholic drink that is usually made from red or white fermented grapes. Fermentation happens using yeast which consumes the sugar in grape juice and creates alcohol. Many different styles of this alcoholic drink can be achieved using a variety of grapes combined with different types of yeast.

The top 5 wines under $20, according to Medium are:

Between 7,000 BC – 6,500 BC, ancient tribes in China were already fermenting drinks and storing them in jars. These early beverages were made of fruit, rice, and honey. In Armenia, the oldest known winery was discovered with ancient winemaking vessels which dated back to 4,100 BC. Egyptians also consumed this alcoholic drink, likely transporting it in goatskin vessels and storing it in the tombs of pharaohs. Phoenician traders took wine and grapevines with them on their travels to the Mediterranean where they became very popular.

The Romans are credited with turning this drink into an industry by attempting to produce higher quality beverages between 2,000 BC – 3,000 BC. When the Roman Empire collapsed, the winemaking tradition was kept alive by the church for its religious ceremonies and masses. This alcoholic drink made its way around the world through journeys and expeditions led by Catholic countries. This beverage eventually made its way to the U.S., growing in popularity over the years as grapevine production became more widespread. These days, many states including California, Washington, and New York produce wine that many feel is on par with European standards.

This alcoholic drink is often used in the kitchen to intensify, enhance, and accent the flavor of dishes. It can be used in marinades, to cook food, or to flavor a dish. As this is a liquid, it’s important to remember that it will evaporate leaving behind only flavor, so less is more. Ideally, it should be allowed to simmer for the food or dish to absorb its flavor.

The nutritional value for one serving (5 fl oz) of wine: 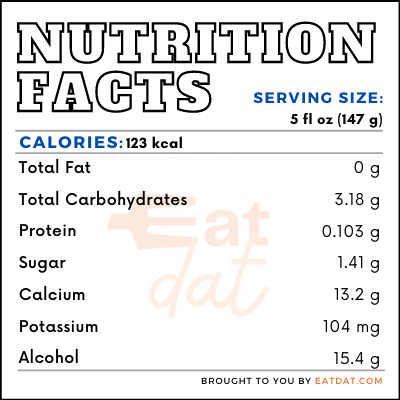 Wine has a reputation for being good for the heart in moderate doses. This is attributed to the presence of antioxidants such as quercetin and resveratrol which are stored in the grape’s skin. A 175 ml glass of red wine contains 148 calories and less sugar than white or rosé varieties. Nonetheless, this alcoholic drink should always be consumed responsibly to avoid weight gain, liver problems, and other health issues.

California state produces 90% of all the wine made in America. Commercial production of this beverage always begins with growing grapes. Freshly picked grapes are placed inside of a crusher, then a machine called a presser which squeezes out their juice. The juice is filtered and stored in tanks where winemakers add yeast to ferment it and turn it into alcohol. After fermentation, it is stored for a few months then filtered, bottled, and stored in a cool place until sold.

While you can age like a fine wine, some bottles age differently than others. Storing your it correctly will ensure that it lasts long enough to be thoroughly enjoyed. This drink should always be kept consistently cool (between 45° F and 65° F) and very far away from heat. It’s best to avoid huge changes in temperature and exposing this alcoholic drink to too much light. Humidity helps keep corks from drying out and this drink from aging too fast, so aim for a 70% humidity level.

Generally speaking, there are two varieties of grapes: red and white. These grapes can make red, white, rosé, dessert, or sparkling wine. Red grapes are often processed with the skin, stems, and seeds as these parts of the fruit add to the flavor. Although red wine is fermented for less time, it is always aerated to give it a more nuanced taste. Some common types are Pinot Noir, Merlot, Syrah, and Cabernet Sauvignon.

White wine has a more delicate flavor and is made using only grape juice from crushed grapes. Once the grapes are crushed, the skin, seeds, and stems are removed before fermentation can begin. During this fermentation process, the grape juice must be kept at 62 °F and left to ferment for much longer, around three weeks. This variety is also not aerated otherwise its flavor would change too much. Popular types are Pinot Gris, Sauvignon Blanc, and Chardonnay.

Rosé follows a similar process to red wine but is not fermented with the red grape skins the entire time. Removing the skins and giving it time to ferment in a separate tank affects both the color and flavor of this beverage. This variety is often enjoyed for its ability to combine the color of red with the light flavor of white wine. Rosé has become increasingly popular in recent years with varieties such as Sangiovese, Zinfandel, and Grenache being very well-liked.

This centuries-old alcoholic drink isn’t only for sipping, it’s great in food, too! If you have some left over, you can use them in these recipes:

The Food & Drug Administration requires this to be bottled, packaged, and labeled according to regulations from the Secretary of the Treasury. However, it is The Bureau of Alcohol, Tobacco, and Firearms that is in charge of inspecting and enforcing these regulations. The FDA also has regulations for dealcoholized wine which dictates the exact protocol for labeling these products.

“The History Of Wine Timeline: How Wine Colonized The World.” VinePair, Vinepair.com, vinepair.com/wine-colonized-world-wine-history/.