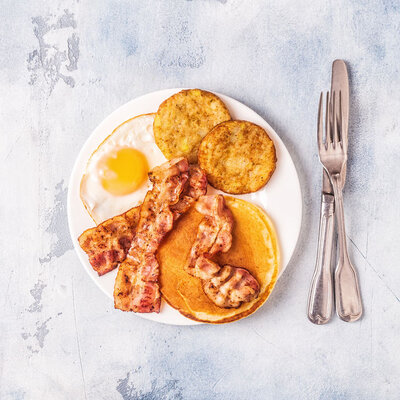 Bacon is salt-cured meat, prepared from various cuts of pork. It is most commonly made from pork belly or back. Bacon can be eaten on its own, as a side dish, or as an ingredient in different recipes. It is usually made by brining and then either cold or hot smoking before being sliced.

The top 10 most popular bacon brands are:

The ancient Chinese first salt-preserved pork meat around 4,900 BC. By Roman times, curing pork had already become a well-established practice and Cato the Elder wrote about salting this meat. Some historians believe that Marco Polo brought the recipe for this meat back to Italy from his travels. Until the 16th century, bacon referred to all types of pork meat. Christopher Columbus is believed to have taken eight pigs with him to the Americas, while Hernando de Soto took thirteen, thereby transporting this meat to the New World. Today, this is one of the most highly consumed meats across the globe.

A 100g serving of bacon can contain:

This food is full of protein and essential amino acids. It also has key vitamins such as vitamin A and choline, as well as omega-3 and omega-6 fatty acids. Additionally, it provides other nutrients including magnesium, phosphorus, potassium, sodium, zinc, copper, and selenium.

While the traditional method for making this was the dry curing method, most products made today are wet cured. Dry curing involves rubbing salt on cuts of meat and leaving them to cure over a week or two. Wet curing involves making a brine of salt, sugar, sodium nitrite, and other chemicals or seasonings. First, the meat is injected with the brine. Then, the cured meat is smoked for enhanced flavor and preservation. Instead of smoking, some suppliers put the cured meat in a convection oven. However, the dry-curing method retains more flavor than the industrial curing method.

This meat is flavorful and can be used in a variety of dishes. Here are a few popular recipes:

The USDA regulates all meat products and defines this meat as the cured belly of a swine (hog) carcass. If meat from other parts of the body are used, it must be specified on the packaging. This food is considered red meat. Hormones are prohibited in raising hogs. All pork products are graded based on quality and cleanliness.