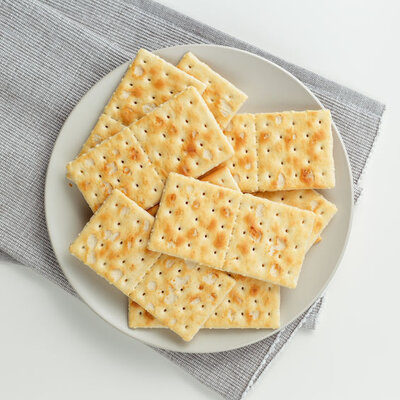 Crackers are flat baked goods made from flour, water, salt, sugar, and oil. Sometimes, they incorporate seasonings, such as herbs, seeds, or cheeses added to the dough or possibly sprinkled on top before baking.

The ten most popular brands of crackers are:

In the Old Farmer’s Almanac, it is recorded that the predecessors of this food and crackers themselves were born in New England. In 1792, John Pearson of Newburyport, Massachusetts, made a cracker-like product using just bread and water called “pilot bread.” It became famous immediately amongst sailors because of its long life span. It was also known as hardtack or sea biscuit. By 1810, the cracker business was booming, leading to the modern day ubiquitousness of this food.

Crackers are quite versatile in the kitchen. They are well-suited to toppings like butter, cheese, peanut butter, margarine, or even jam. This food, when crushed, can also be used as the base ingredient for several desserts, including pies and puddings. 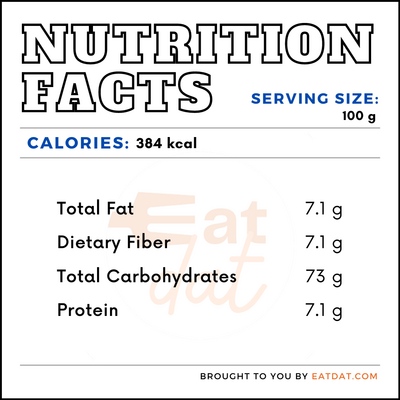 This food is low in calories and usually free of artificial colors and preservatives; hence it’s healthier compared to other biscuits. It’s a rich source of dietary fiber and B vitamins. Also, it provides energy to the body. Nonetheless, when consumed in excess it may cause indigestion.

Commercial production of this food begins with scaling or metering ingredients, followed by sponge preparation, which involves the mixing and fermentation processes. Then, ingredients are mixed at a low speed for about 2-3 minutes for adequate mixing. Next, fermentation begins by allowing the sponge to ferment for 16-20 hours at a temperature of 80°F and 75% RH TTA. The pH and temperature should be properly inspected throughout the process. The initial pH would be 6.0, while the final pH would be 4.0. After that, the dough must be remixed with the extra ingredients (with this addition, the dough’s pH reaches an alkaline level). Then, the dough is made to rest for about 3-5 hours using the sponge’s conditions.

Next, pre-sheeting of the dough happens as the shape of the cracker is gradually formed. After, the dough is laminated with 4-6 layers of a preset thickness. Dough gauging is done by reduction rollers, which gives it a final thickness of 2-4mm. The dough is docked and cut using a rotary cutter or stamping cutter with docking holes, and then topping and salting take place. To finish, the dough is baked in a 4-zone direct gas-fired oven at a temperature between 482-572°F. Oil sprinkling is optional, after which the crackers are allowed to cool off. Finally, stacking and packing are done.

At home, the process used in making crackers isn’t as rigorous. Ingredients used include wheat flour, water, yeast, and sugar. The procedure for soda crackers (saltines) involves fermentation and can be made using the sponge and dough system. This version is dry and has flaky layers.

The best way to store this snack is to keep them in airtight containers or bags, and store them in a cool and dry place. If they aren’t exposed to air during this period, they will last up to three months. Once opened, crackers may only last for two weeks or a little more.

These come in an array of flavors. Some popular recipes include:

The Food & Drug Administration regulates the nutritional labeling information for food products like crackers. The FDA also regulates the reference amount consumed per eating occasion. Also, they monitor the nutrient content claims for fat, fatty acid, and cholesterol content of food products like this snack. They regulate current good manufacturing practices, hazard analysis, and risk-based preventive control for baked goods like this food.