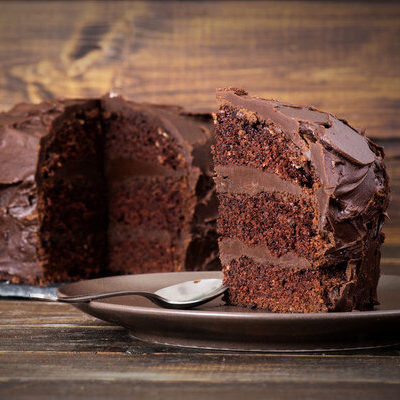 What is Devil’s Food Cake?

Devil’s food cake is a rich, moist chocolate layer cake that is filled and topped with dark chocolate frosting.

A popular variation of this cake is red velvet cake, which uses red coloring in the layers and ermine icing instead. This rich chocolate cake is the fifth most popular cake in the United States.

The top 6 best selling chocolate cake mix brands in the US are:

Food historians believe that this cake has been around in the United States since the 1880s, as it appeared in a food writer’s memoirs which were set at that time. During this early period, it was most likely flavored with beets and cocoa. The name of this cake originates from the fact that, traditionally, food which was dark, rich, or spicy was described as ‘deviled’. It wasn’t until the 1900s that this rich, chocolatey cake began to take off and in 1902 the first recipe for it appeared in Mrs. Rorer’s New Cook Book. By 1913, devil’s food cake was appearing in cookbooks all over the US.

In the 1930s, Red Devil’s food cake appeared and became popular for its color which was achieved by combining alkaline and acid ingredients. These cakes were so sought-after that there are many legends surrounding them, including that they were invented at the Waldorf Astoria Hotel or that a customer was given $100 when asked for the secret recipe. However, in the 1970s, this cake lost favor when hysteria about red dye being linked to cancer led to people no longer eating it. Nowadays, this cake contains red food dyes that have been deemed safe for consumption. It remains a favorite dessert with many Americans to this day.

Devil’s food cake is very rich and makes a delicious chocolatey treat for special occasions. However, it’s best to consume this food in moderation and in combination with diet and exercise. A single serving (64g) of this cake can contain: 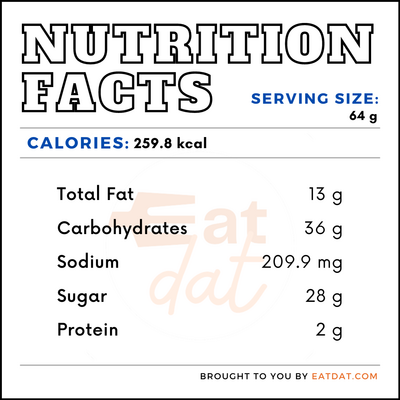 While this dessert does offer trace amounts of iron and calcium, they are not substantial enough to make this a healthy food. Excess consumption of sugar and sweeteners can lead to health issues like poor dental health, heart disease, diabetes, obesity, and even liver disease.

The commercial production of cakes involves first weighing ingredients and then adding them to large mixers. Ingredients such as flour, sugar, eggs, shortening, emulsifiers, chemical leavening, and flavorings are added to these large mixers and then mixed. Once the ingredients are thoroughly mixed, they go through a homogenizing/aeration machine. This step is important to obtain a 0.7 specific gravity that is characteristic to this cake. It  is automatically deposited into baking pans and baked. After they are cooled, they are sealed in plastic bags to maintain freshness, packaged, and stored until ready to be shipped.

Cake mixes are very popular with 188.68 million Americans acknowledging using them in 2019. It is a decadent dessert that anyone who likes chocolate will enjoy. However, if you manage to have any leftovers, it’s vital to store this cake correctly to keep it from drying out. Most cakes don’t need to be refrigerated unless your kitchen gets very hot or they have fruit filling, fruit topping, or whipped cream.

This chocolatey cake has been reinvented in many ways. Here are some popular recipes:

Although the Food & Drug Administration doesn’t regulate Devil’s food cake specifically, they do regulate the labeling and references amounts of bread products such as cake mixes. Furthermore, the FDA also regulates food ingredients, additives, and colors commonly used in cake mixes. The FDA also regulates eggs and provides a food safety rule to prevent the spread of foodborne illnesses.