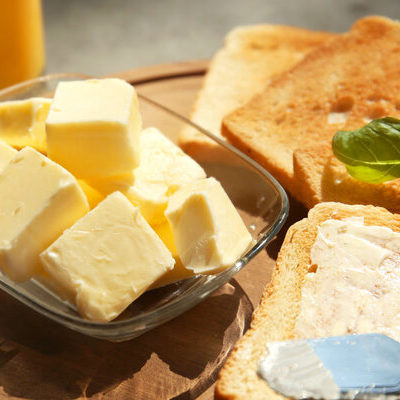 Butter is a dairy product made from the fats and proteins of milk, prepared by churning the cream of that milk, usually sourced from cows. It generally contains around 82 percent fats, 16 percent water, and 2 percent milk solids. Also, it may be made from the milk of other animals, such as goats, sheep, buffaloes, yaks, and camels, depending on geographical location and local traditions.

According to Insider, the most popular butter brands are:

This dairy product has a long history and is believed to have been invented just after the domestication of animals in human history. The first domesticated animals would have been sheep, goat, or yak, and this food may have come from them. It is not clear when it was actually invented, however archaeological remains show that it was already in practice 8,500 years ago. Due to almost universal lactose intolerance in adults, it became popular as an energy-giving food, when it was accidentally discovered by nomads traveling long distances. They would put sacks of milk on their pack animals and the constant movement eventually turned the milk into butter.

This dairy product was used in one form or the other in many ancient civilizations such as Sumerian, Indian, and northern European. It was also used in ancient Rome and ancient Egypt for cosmetics and medicine. In the Middle Ages, this dairy product was forbidden during Lent by the Catholic Church. Many chose to pay the hefty fine instead of doing without, thus funding Rouen Cathedral’s Tour de Beurre. Later on, this dairy product was so critical to Ireland’s economy that they opened a Butter Exchange in Cork. Even today, butter buried in bogs is regularly found in the country. 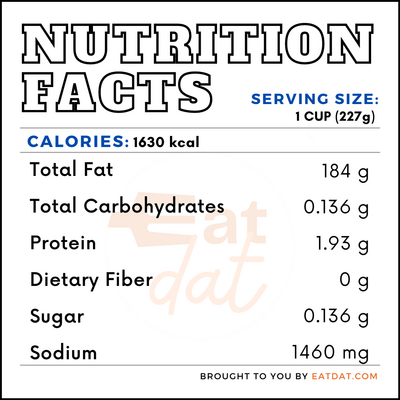 Butter is high in saturated fats as well as omega-3 and omega-6 fatty acids. It also contains decent levels of proteins. There are next to no carbohydrates present in it. This dairy product is a rich source of vitamins A, D, E, and K. It also contains B vitamins such as thiamin, riboflavin, folate, B12, pantothenic acid, and betaine. This dairy product is also a rich source of minerals like calcium, magnesium, phosphorus, potassium, sodium, zinc, selenium, and fluoride.

Despite having a bad reputation, studies have shown that it does not impact cardiovascular health negatively. Limited consumption of this dairy product may be good for health in the long run.

India is the largest producer of this dairy product globally, followed by the United States, Pakistan, New Zealand, Germany, France, Russia, Turkey, Poland, and Ireland. The greatest consumers of it are New Zealand, Australia, European Union, India, Belarus, and Canada.

The commercial form of producing this dairy product is made by separating cream from milk. This process is done by using a centrifuge machine, which uses centrifugal force to ensure this separation. Buttermilk, which is separated during this process, is a byproduct and is sold off separately. The solids left are the butter, which is then pasteurized, before being shaped, packaged, and marketed.

Pasteurized and salted types may be kept out at room temperature for a couple of days, provided the temperature is suitable. Opened packages of this dairy product may be stored for up to two months in the refrigerator. When frozen, it may last for up to nine months but beyond this time, it begins to go rancid.

Butter is classified as a dairy product. The USDA defines it as a food product made exclusively from milk or cream, or both, with or without common salt, and with or without additional coloring matter, and containing not less than 80 percent by weight of milkfat. It may be classified into grades AA, A, and B. The Food & Drug Administration regulates the labeling and nutritional claims that can be made for this dairy product.