Fudge is a form of sugar candy produced by cooking sugar, butter, salt, milk, and other flavorings like chocolate. This sweet generally has a brown color, firm consistency, and smooth texture. It also has a sweet and creamy taste, if made with tiny sugar crystals.

According to Taste of Home, the top 10 most popular fudge flavors are:

Researchers and food historians point to America as this candy’s place of origin with some historians speculating that it was invented on February 14, 1886. One of the earliest mentions of this snack was in a letter written by Emelyn Battersby, who was a student at Vassar College in Poughkeepsie, New York. She claimed that a schoolmate’s relative made fudge in Baltimore in 1886 and sold it at the rate of 40 cents per pound. Emelyn got the recipe for the snack and made 30 pounds of it for the Vassar Senior Auction. Gradually, the news about this tasty treat traveled to other students.

Other people made their versions of this confection, which were similar to the original recipe. The first recipes for this were delicate compared to modern day recipes. There was a great need for consistent stirring and precision with ingredient measurements and cooking duration. While the recipe may seem basic, it is easy to undercook or burn a batch, as not every person had a thermometer back then. Inconsistency with stirring can also affect the results. Over time, as new recipes emerged, these problems were solved and allowed for a better-quality product.

In the kitchen, people combine this sugar candy with baked goods. It can also serve as an accompaniment to alcoholic beverages or hot drinks. Not to mention, fudge is popularly used to flavor or top other sweets such ice cream or milkshakes.

A serving size of 17g of fudge contains: 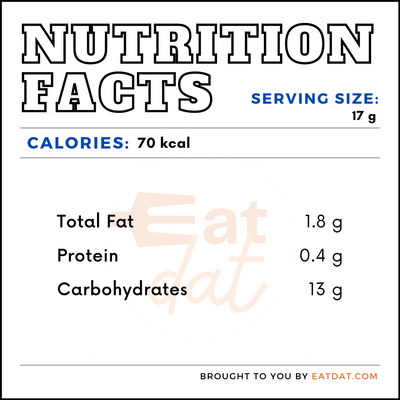 This candy contains milk and butter, which provide health benefits such as:

However, it is essential to consume this sugar candy in moderation. Too much sugar can cause weight gain, diabetes, and other health issues.

The commercial method for producing fudge involves mixing sugar, fat, a little salt, and other flavoring ingredients. The first step is to heat the mixture to 235-245°F and allow it to cool to 90-120°F. Next, producers cream the mixture and spread it out on trays to set the sugar candy. After it has set, the fudge is cut into pieces that can be packaged and stored until sale.

This candy can be made using various ingredients. Here are five recipes worth trying:

The Food and Drug Administration does not explicitly have any regulations concerning the production of this sugar candy. However, it has standards of identity for various types of milk and cream. According to this organization, milk refers to the lacteal secretion of one or more healthy cows, which is practically free from colostrum. The FDA does not regulate the growing, harvesting, or packing of sugar since it is rarely consumed raw. Milk and sugar are principal ingredients used in making fudge.