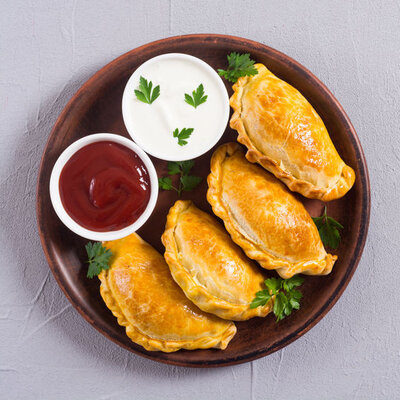 What is an Empanada?

Empanadas are a type of pastry filled with savory ingredients then deep fried or baked. The covering dough may be made of corn or wheat flour, although cassava or plantain flour is used in the Caribbean. Popular fillings include meat, fish, vegetables, corn, cheese, and mushrooms. This dish may be served with salsa and eaten at special occasions, such as celebrations or festivals.

The most popular types of empanadas are:

This pastry appears to have originated in Persia, where the first reference to it dates back to 100 BC. With the Muslim conquest of Persia, the dish spread through the Islamic world. The Moors introduced this pastry to both Spain and Portugal. These empanadas were originally larger, double crusted pies that were cut into pieces and served. The Spanish and Portuguese conquistadors introduced the dish to Latin America, where it was adopted quickly and evolved into smaller pockets of locally available fillings. However, it was a Catalan chef, Roberto de Nola, who first added the empanada recipe to a cookbook, Llibre del Coch.

The nutritional value of this dish depends on the ingredients used for the stuffing, pastry covering, as well as the cooking method. A traditional beef empanada contains 240 calories. Also, baked versions of this pastry are a better option for healthy eating than fried ones, which may alter the lipid profile of the dish and increase the composition of unhealthy fats.

Empanadas are often served freshly made in restaurants or bakeries. First, the fillings are prepared so that they have just enough juice and are not runny, which can ruin the dish. This is done with the help of binding ingredients, such as cheese or potatoes. Next, the dough is mixed and rolled out, then cut into circles.

After that, the filling is put inside and the dough is wrapped around it. Then, the pastry is baked or fried before serving with salsa or salad. Some companies and restaurants use machines for preparing this pastry. Frozen options are also available on the market.

These can be made in a variety of ways, and with locally popular stuffing. Here are a few recipes that show the versatility of this dish:

The Food Safety and Inspection Service (FSIS) of the U.S. Department of Agriculture (USDA) is responsible for the regulation of meat and poultry, used as filling in traditional recipes of this pastry. The flour used in the dough is regulated by the FDA and defined as food prepared by grinding and bolting cleaned wheat, other than durum wheat and red durum wheat. Empanada recipes that call for corn flour are also regulated by the FDA, which defines corn flour as food prepared by grinding and bolting cleaned white or yellow corn. Other fillings such as beans, certain vegetables, corn, and nuts fall under the rarely consumed raw category of the FDA. Cheese, commonly used in this pastry as a binding agent, is also subject to FDA regulations.

The History of the Empanada, Loco Gringo
https://www.locogringo.com/blog/food/history-empanada-happy-empanada-day