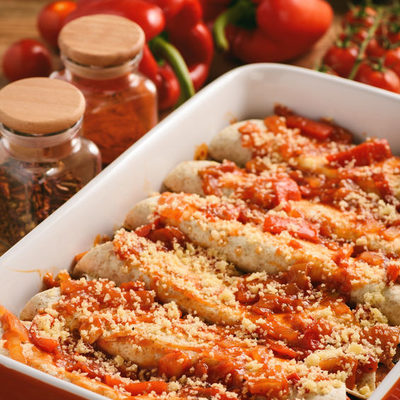 Enchiladas are a Mexican dish that consists of tortillas stuffed with meat, cheese, or beans and covered in a spicy sauce known as salsa. There are several variations of this dish that include different fillings and sauces.

The top 5 best frozen enchiladas, according to The Mercury News are:

Corn tortillas have been eaten as far back as 9,000 years ago, based on remains found at an ancient milling site. Between 2000 BC – 250 BC, the Maya of the Yucatan peninsula were already eating a food similar to this. However, the credit often goes to the Aztecs because of its name in Nahuatl, chīllapīzzali, which means “chili flute”. This dish was praised by Aztec nobility according to written accounts from Spanish conquistador Bernal Díaz del Castillo in the 16th century. Shortly after Díaz arrived, the Aztec empire would be overtaken by Spanish forces with much of its culture destroyed.

During the Spanish domination, flour tortillas were created to satisfy Spaniards, Mexicans, and Mestizos alike. Enchiladas, being both flavorful and easy to cook, managed to remain popular during the time that Mexico became a Spanish colony. This dish later appeared in a Mexican cookbook in 1831, thereby solidifying its place in Mexican culinary culture. The popularity of this spicy dish would become widespread in the US after it annexed Texas, New Mexico, Arizona, and California. By the early 20th century, this would appear on menus in a growing number of restaurants across the United States. The average American said they consume Mexican food or ingredients 4-7 times a month. Of those ingredients, corn tortillas are the second most popular.

Its nutritional value is highly dependent upon its filling, sauce, and toppings. A beef enchilada topped with cheese can have: 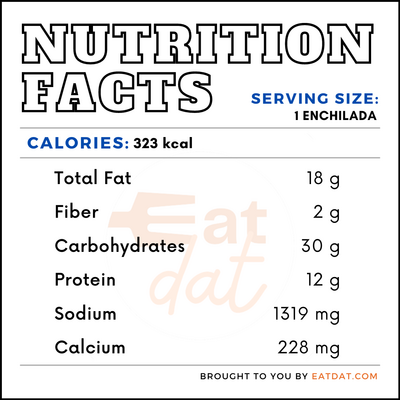 Although the presence of protein, vitamins, and minerals in this is good, its fat, carbohydrates, and sodium levels are not healthy. For a healthier alternative, try consuming bean enchiladas with little to no cheese.

Many supermarkets offer frozen enchiladas from various brands and an array of recipes. The commercial production begins with preparing the filling sauce in a machine that mixes all of the ingredients. Once the filling sauce is cooled and ready, it’s pumped out in measured amounts onto the flour  tortillas. These tortillas are then rolled around the filling and placed in their containers before they’re covered in chili sauce. After that, the enchiladas are baked, frozen, packaged, and stored until they are to be sent off to supermarkets.

This dish is a savory and fulfilling meal that can please the whole family. If you find yourself with leftovers, take care to store them correctly for maximum enjoyment the second time around. When refrigerating, ensure that they have cooled down to room temperature and then wrap them tightly with foil. In the refrigerator, you can store these leftovers for up to two days. In the freezer, you can store it for up to three months in freezer-safe bags.

This Mexican dish can be adjusted to all tastes with different fillings and sauces. Here are some popular recipes:

Enchiladas that are commercially produced are subject to labeling regulations mandated by the U.S. Food & Drug Administration. These regulations dictate that producers include the recommended serving size, reference amounts for ingredients, as well as uses for those ingredients. Since enchiladas cannot be measured in cups, units and the weight of sauces must be factored into the labeling, as well.

Ramírez-Santos, Hernando. Statistics Behind The Insatiable Appetite for Mexican Food in the U.S. 12 Sept. 2019, abasto.com/en/news/insatiable-appetite-mexican-food-us/.