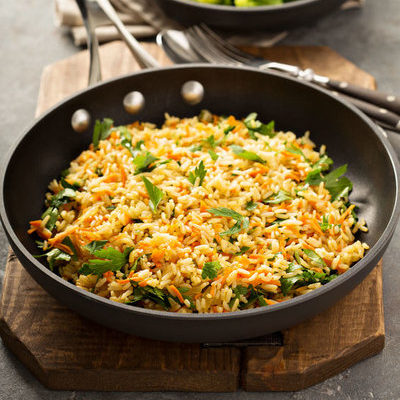 What is Fried Rice?

Fried rice is a hot dish that includes cooked rice, and depending on the recipe, eggs, meat, seafood, or vegetables. The rice and chosen ingredients are stir-fried in a wok with cooking oil and sauce.

The top ten Chinese takeout items, according to Chowhound are:

As is true with many time-honored recipes, there is a lot of speculation about fried rice’s exact origin. Nonetheless, it has been dated back to the Sui Dynasty of 589-618 AD in the city of Yangzhou. Chinese legend says that it began as a dish called “golden rice” and was the favorite dish of Emperor Yang Guang when visiting the city. During the Ming Dynasty (1368-1644), chefs added more ingredients to golden rice and created Yangchow (Yangzhou fried rice). Yangchow remains a standard and a staple in Chinese cuisine to this day.

Southern China is renowned for this dish as rice is the main crop of that area. Because it’s essentially leftovers, this rice became extraordinarily popular and quickly spread to other parts of Asia. Countries such as Indonesia and Thailand have their versions of this dish. With trade and immigration, Chinese food and rice expanded to the rest of the globe where Chinese cuisine became widespread and easily accessible. In 2002, the Yangzhou Cuisine Association released a rubric for this dish which includes chicken, ham, scallops, shrimp, green peas, mushrooms, bamboo shoots, and sea cucumber.

Brown rice is more nutritious than white rice. Frying rice adds more calories and cholesterol but is still low in sugar and saturated fat. One cup of fried rice can contain: 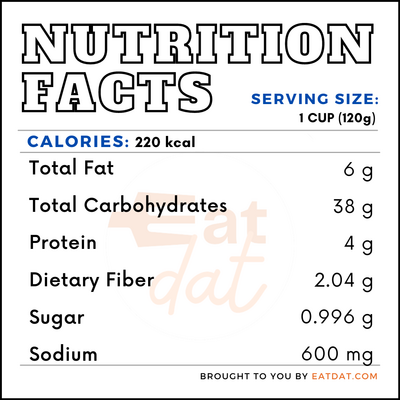 Depending on what it’s made with, this dish can have more protein, vitamins, and minerals.

Various brands commercially produce fried rice in the US. There are even special machines that can separately chop vegetables, cook rice, and stir-fry the ingredients. On a large scale, this dish often begins with cooking the rice first. While the rice is cooling, ingredients such as chopped vegetables or meat are added to a spinning cooking machine. This machine looks like a steel drum which simultaneously mixes ingredients while it heats them for evenly cooked fried rice.

It is a savory dish that helps make use of leftover food. Nonetheless, to safely consume rice, it’s important to pay attention to food storage to avoid foodborne illnesses. Cooked rice should always be stored in a tightly sealed container to avoid breeding bacteria. When eating rice as a hot dish, it should be kept warm or even hot at a temperature up to 140°F. If you are not using or consuming the rice immediately, it should be cooled quickly, wrapped tightly, and kept in the refrigerator for up to four days. Day-old rice is best for this purpose due to starch retrogradation that firms up the rice, and makes it more resilient during the frying process.

This savory dish is versatile and can cater to many palettes. Here are some popular rice recipes:

The Food and Drug Administration has a regulation in place to prevent illnesses and, in rare cases, death caused by processed food containing eggs. As egg is often present in this dish, it should be declared to and regulated by the FDA. In 2018, the FDA issued a recall on vegetable rice made by Feel Good Foods because it had an undeclared egg. Last year, the FDA released a new regulation on the percentage in which rice can be enriched to standardize all cereal and grain products. The standard of identity designates the number of vitamins and minerals that the FDA prescribes should be present in enriched rice.