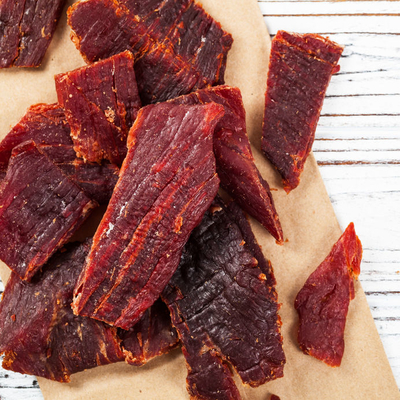 Jerky is a meat that has been cut into strips, cooked, and dehydrated in order to prevent spoilage. This process removes all the moisture from the meat, which can then survive without microbial spoilage, for a long time. The normal shelf life of store-bought jerky is more than one year.

It can be made from a number of different types of meats, including some exotic meats such as alligator, alpaca, ostrich, snake, etc. However, the most common types of meat used are beef, chicken, and fish.

The top brands in the US are:

There is archaeological evidence that meat was being dried in the sun in Ancient Egypt. Such meat has also been found in tombs. However, jerky in its present form is a South American invention. The Quechua tribe started to dry meat of alpaca and llama since the 1500s and called it “ch’arki”, which means dried meat. Spanish conquistadors brought it back to Europe, from whence it spread back to North America.

Another story is that the Sioux tribe of North America was making it from buffalo meat for centuries. When the white settlers came, they adopted this method of eating meat in order to survive the harsh conditions.

A third source often mentioned is the Cree tribe, who called it pemmican. They made flavored buffalo jerky, often mixed with the meat of elk or deer as well as berries and other dried fruits.

Traditionally, it was made by being dried naturally in the sun or smoked on fires. Today, jerky is made from meat that is first thinly sliced into strips, then flavors and spices are added to it. It is often marinated at this stage to soak in the spices. The salt and other additives are also added at this stage. Then the meat is cooked and then dried in a dehydrator.

This is nutrient-dense meat. High in protein and low in carbohydrates, it makes a convenient snack. The protein aids in muscle building and strength. In addition, it contains micronutrients such as zinc, vitamin B12, folate, iron, phosphorous, copper, selenium, choline, and others. Choline is useful for maintaining brain health and is associated with better cognitive performance. Iron is required for producing blood cells and zinc helps to boost the immune system.

A 100g serving of jerky contains: 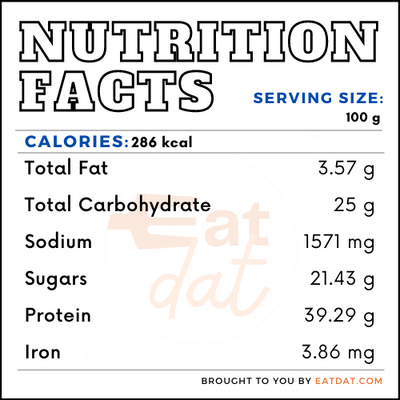 On the downside, high levels of sodium are unavoidable since it is part of the process of preservation and drying. Too much salt can lead to health problems such as high blood pressure, heart diseases, etc. Some also include MSG and other additives.

It is often eaten as a quick snack as it is or deep-fried. However, here are a few more elaborate recipes.