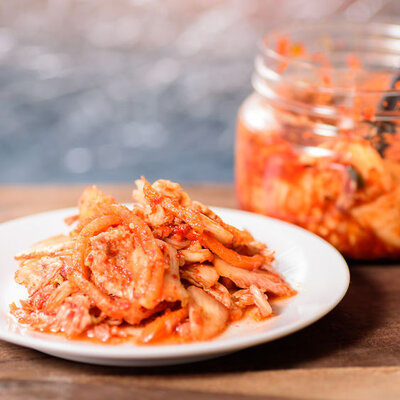 Kimchi is a traditional Korean dish made from fermented vegetables, fish sauce, and a mix of spices. There are different types of this food, each with a different set of vegetables such as cabbage, carrots, radish, scallions, eggplant, ginger, onion, pumpkin, spinach, or tomatoes.

Salt, chilli powder, scallions, garlic, ginger, salted seafood, fish sauce, and sugar are commonly added to give flavor to the dish. In Korea, this food is an integral part of every meal and may be eaten by itself, as a side dish, appetizer, or as an ingredient in different dishes.

The top 6 most popular kimchi brands available on the market are:

This dish originated in Korea over 3,000 years ago. The method for making this food was originally invented to store vegetables during the cold winters when starvation was rampant. In ancient Korea, this food was buried in earthen or stone jars and left to ferment, whereas in summer, it was often hung deep inside of wells. Korean immigrants spread the dish to much of Europe, Africa, and America, where it gained popularity. During the Vietnam War, this food became a staple in Korean soldier’s diets, thus making it widely available in Vietnam, as well. Recently, culinary vlogger, Li Ziqi, created a controversy around this dish by incorrectly referring to it as Chinese food.

Kimchi is rich in vitamins such as choline, folate, niacin, riboflavin, thiamin, vitamin A, vitamin B6, and vitamin K. It is also full of minerals like iron and sodium. A 100g serving of kimchi contains: 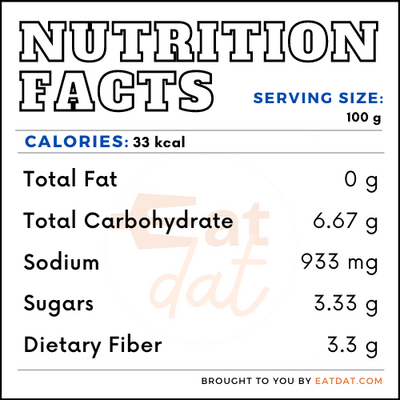 Additionally, this food possesses antioxidant and anti-inflammatory properties. Furthermore, it is a probiotic food and contains lactic acid bacteria, which is essential for digestion and gut health. It prevents gastrointestinal diseases such as irritable bowel syndrome, reduces cholesterol, and inflammation. Kimchi can help prevent certain types of cancers, cardiovascular diseases, metabolic syndrome risks, and aging. There is also some evidence that consuming it may help in preventing diabetes.

To produce kimchi, first the cabbage (and other vegetables) are washed and sliced into small pieces. Next, salt is added and left to soak in for 3 hours during the brining process. Then, the cabbage is rinsed and drained. In the meantime, ginger, garlic, fish sauce, shrimp paste, and water are mixed into a smooth paste, into which the chilli powder is added. After that, the cabbage is added to the paste and radish and scallions are added as well.

Finally, this mixture is thoroughly mixed and sealed in a jar, leaving some space at the top for fermentation. The mixture is allowed to ferment for at least five days. Only fermented products may be called kimchi. This food may be stored for several months in a refrigerator inside a jar or a crock with a lid. Using a plate or a dish to press the vegetables down into the brine will keep them flavorful for longer.

This dish can be added to any dish to provide flavor and nutrients. Here are a few popular recipes:

The FDA does not have any regulations in regards to this food. According to the FAO, kimchi is a product prepared by fermenting varieties of Chinese cabbage and seasoning mixture mainly consisting of red pepper powder, garlic, ginger, edible Allium varieties other than garlic, and radish. Different states in the US have different laws on selling fermented products.