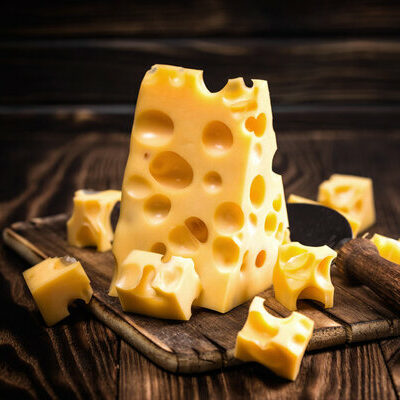 What is Swiss Cheese?

Swiss cheese is an umbrella term for cheese made in Switzerland, which is usually made of cow’s milk. It is usually similar to Emmental cheese and has a yellowish color and hard texture. This cheese has a mild and sweet flavor. In Switzerland, it is also known as Alpine cheese of which there are many varieties.

The top 10 most popular types of Swiss cheese are:

Switzerland has been producing cheese since at least Roman times, as documented by Pliny the Elder. He named the cheese after the Helvetians, a local tribe. This cheese was originally cottage cheese made with sour milk. The addition of rennet to make cheese was a technique that was discovered in the 15th century in Switzerland, and quickly became popular. Switzerland dominated the cheese culture in Europe until the 18th century. The Swiss Cheese Union handled all aspects of production and export until 1999 when it was dissolved. Today, Swiss cheese continues to remain loyal to its tradition and is strictly protected by Appellation d’Origine Protégée (AOP).

Swiss cheese is usually made from cow’s milk. First, bacteria is added to the milk and heated to form the curds. Then, these are soaked in brine giving it a salty flavor. Next, water is released and the bacteria expands, which gives Swiss cheese the famous holes. After that, the heating and cooling process takes place several times until there are enough holes.

Swiss cheese is best stored in parchment or wax paper and kept in the refrigerator for up to four weeks. Also, it can be frozen and stored for up to six months by adding an extra layer of aluminum foil to the wrapping.

Since Swiss cheese melts well, it works great in sandwiches and baked goods. Moreover, it complements potatoes, rice, and bread as a topping. It is often the main cheese used in fondues and cheese sauces. Some prefer this type of cheese on a cheese platter. Here are a few recipes:

Swiss cheese, also known as Emmentaler, is defined as a food with holes or eyes and containing at least 43 percent milkfat and maximum 41 percent moisture. The ingredients may be pasteurized and are aged for at least 60 days.