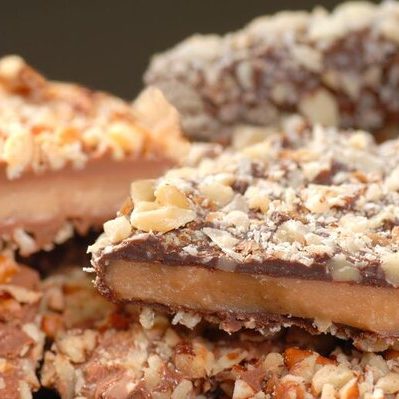 Toffee is a crunchy confection composed of caramelized sugar or molasses and butter.

This candy’s textures can range from soft and chewy to hard and brittle, depending on the variety. The most popular variation of this candy, known as English toffee, includes a top layer of chocolate sprinkled with nuts.

The top 6 most popular brands on the market are:

Some theories suggest that its name originates from “tafia”, a type of molasses made from distilled rum in the West Indies. British plantations in the Caribbean had begun producing enough sugar to make it an affordable commodity, leading to a variety of new sweets. By 1825, the word toffee could be found in the Oxford English Dictionary. However, it was first described as a variation of taffy.

The recipe would later evolve in 1860 when an English immigrant to New York covered the treat in chocolate and almonds. In the United States, this version of the original candy became known as buttercrunch. This treat would continue to change until there were three main varieties: English, American, and Welsh. Buttercrunch is still widely enjoyed to this day, especially around the holidays.

While it can be enjoyed on its own, it also makes a delectable ingredient in sweet dishes. This candy can be used to make sweet cakes, pies, and puddings. It can also be melted down into a syrup to top milkshakes, candy apples, macaroons, popcorn, and many other treats.

This sweet delicacy offers minimal nutritional value. A single piece of this candy (12g) can contains: 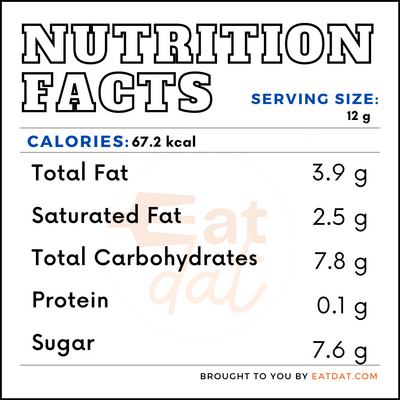 This sweet treat contains trace amounts of vitamin A, B6, B12, C, E, and K, as well as some other nutrients. However, these amounts are not sufficient for a healthy and balanced diet. It’s best to enjoy this treat in moderation to minimize your daily intake of added sugar.

The commercial production of this sweet treat begins with measuring glucose and liquid sugar before pouring them into a copper kettle for mixing. Next, emulsifiers are added to the mixture to bind it together, and then, butter is also added. After that, the mixture is heated until boiling, thus evaporating excess liquid and providing a caramel color. Then, if the batch is a flavored variation, flavoring is added to the mixture.

Once the candy is flavored, it is sent through a wheel for cooling before it is left to rest. After the mixture has rested and cooled down, it is placed in batch rolling machines to form a long, thin rope. The rope slides through rollers which slowly narrow it down to the right size for the candy. Finally, the candy is cut, wrapped, and sent off to be packaged. In the packaging room, they are mixed, weighed, and sealed in bags that are stored until ready to be sold.

Toffee is a classic treat that can be enjoyed in a variety of dishes. Although as this candy is made from butter, it’s vital to store it properly. If you want to keep this treat from softening, it’s best to store it in an airtight container at room temperature. Should your kitchen be on the warmer side, it’s also possible to keep it in the refrigerator for up to two weeks. This candy can even be frozen for up to a month without sacrificing taste or texture.

Classic recipes have been reinvented in many ways. Here are some popular recipes:

The Food & Drug Administration classifies toffee as hard candies and English toffee as chocolate and confectionery products. The FDA has also deemed it suitable for human consumption by itself and in combination with other ingredients. Furthermore, the organization provides recommended reference amounts and label statements for this candy. However, the FDA requires that producers clearly label their butter, nut, or chocolate content to prevent foodborne illnesses and product recalls.

“The ABCs of Toffee.” The Nibble, The Nibble, www.thenibble.com/reviews/main/candy/toffee/toffee-information.asp.