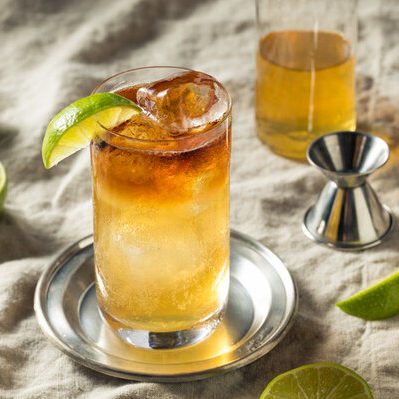 What is Dark ‘n’ Stormy?

The Dark ‘n’ Stormy is a cocktail made with a base of dark rum. Other important ingredients in the cocktail are ginger beer and lime juice. The Dark ‘n’  Stormy is considered a highball cocktail and is served in a highball glass. The traditional recipe calls for Gosling’s Black Seal dark rum, as it is a trademarked drink.

Some popular variations of this cocktail are:

This cocktail was invented sometime after World War I in Bermuda. James Gosling, on his way from England to the US, ended up stranded in Bermuda. The family started a rum production business in 1857 and Gosling’s rum was born, which quickly became popular at the Royal Navy Officers’ Club. Ginger beer, also produced on the island, was mixed with the rum to produce the cocktail at the club. The drink has been served with Gosling’s rum ever since.

Gosling’s Rum has held a trademark for the Dark ‘n’ Stormy cocktail for more than 40 years, since 1980 in Bermuda and 1991 in the USA. The company claims that it is to keep the taste of the cocktail consistent. Also, they have created Gosling’s Stormy Ginger Beer that may be used in the drink. Some bartenders serve this cocktail under the name of Safe Harbor, which gives them more freedom to experiment with the base rum.

Preparing the cocktail is simple. First, ice is added to a highball glass and Gosling’s Black Seal rum is poured in. Then, ginger beer and lime juice are added and the mixture is stirred. A wedge of lime serves as a garnish. 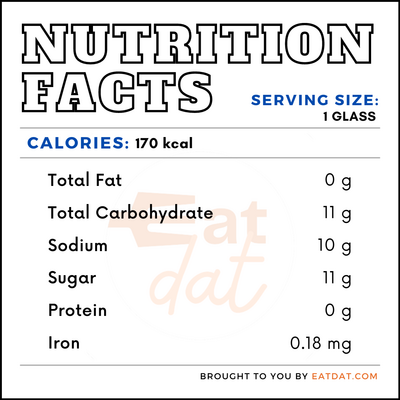 Additionally, ginger beer, an integral ingredient of the cocktail, contains healthy anti-inflammatory and immune-nutrition properties which can help reduce fatigue, inflammation, cardiovascular diseases, diabetes, cancer, and digestive problems. However, ginger beer contains large amounts of sugar, which can lead to detrimental effects when consumed in excess. Lime juice has a high concentration of vitamin C, which keeps the immune system healthy. Other nutrients in lime include iron, calcium, vitamin B6, thiamine, and potassium. In addition, lime juice provides antibacterial, antioxidant, and phytochemical properties.

However, because of the inclusion of rum, Dark ‘n’ Stormy must not be consumed on a regular basis. Rum has an alcohol content of 38%, which is quite high. Overconsumption of alcohol can lead to several health problems, including affecting the brain’s functioning patterns and general lowering of immunity. Liver cirrhosis, pancreatitis, high blood pressure, stroke, and different types of cancers are also resultant from drinking excessive alcohol consumption.

There are multiple variations of this cocktail. Here are a few recipes:

All alcohol products except artisanal products fall under the purview of the TTB (Alcohol and Tobacco Tax and Trade Bureau) in the US. Rum is defined as a spirit distilled from the fermented juice of sugar cane, sugar cane syrup, sugar cane molasses or other sugarcane by-products. The TTB strictly regulates the production and import of alcohol, which must have 95 percent ABV and be bottled at no less than 40 percent ABV. The FDA has strict regulations regarding the content of soft drinks to ensure that they are safe, sanitary, and properly labeled. There are no grade standards for ginger root specified by either FDA or USDA but Hawaiian grade standards are taken as a guide.

Furthermore, the FDA regulates all fruit juices and citrus juices, including lime juice. The organization specifies that lime juice must have at least 24.5 percent concentration. In addition, lime juice is also often used as a flavoring or acidifier, which comes under FDA regulations.