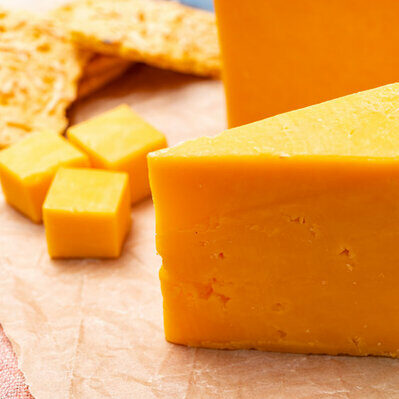 Cheddar is a type of cheese of English origin. Its name comes from a village in Somerset, England. This cheese is made from cow’s milk and falls under the hard cheese category. It has a color that ranges from off-white to deep orange, and a sharp flavor, approaching that of hazelnuts.

The top 10 most popular Cheddar brands are:

The origin of this cheese goes back several centuries, with the first records being from the 12th century AD. This type of cheese was originally only made in the village of Cheddar in Somerset, and was hence named after it. The village had small gorges and caves in which dairy farmers stored their milk to keep it cool. According to legend, a milkmaid forgot a pail of milk in a cave and it had curdled into cheese by the time she returned. An English cheesemaker, Joseph Harding, is known as the Father of Cheddar because of his contribution to technological improvements that permanently improved the quality of the cheese. 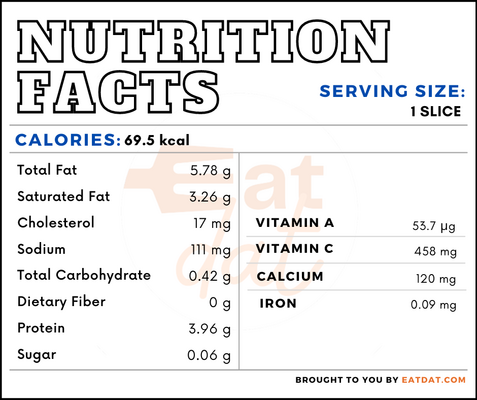 This cheese is produced in many countries including Australia, Argentina, Belgium, Canada, Germany, Ireland, the Netherlands, New Zealand, South Africa, Sweden, Finland and the USA. However, West Country Farmhouse Cheddar is protected by a PDO and may only be produced in Somerset, Dorset, Devon or Cornwall in England. Its commercial production begins with cow’s milk.

First, the milk is warmed and then starter cultures are added to it, allowing it to start fermenting. Vegetarian rennet is added to the mixture, which acts as the coagulant. Curds are formed and the whey is separated and drained until the curds reach a specific consistency.

Then, the curds are cheddared, a process in which cheese slabs are stacked up on top of each other, removing excess moisture and knitting together. The end result is then chipped and salted, before being pressed into molds. Finally, these molds are finally wrapped in cheesecloth and left to age, which allows the rind to form. There are different varieties of cheddar, which indicates how long it has matured.

Cheddar is best stored in wax or cheese paper, with an outer plastic cover. It may last for up to six weeks in the refrigerator, after opening.

This type of cheese is often consumed on its own, though it also works well in soups, sandwiches, and baked goods. This cheese pairs well with whiskey, wine, or beer. The best food pairings for this cheese are fruits, crackers, bread, and mustard. Some most popular uses for this cheese are the classic American dishes, macaroni and cheese and the grilled ham and cheese sandwich. Here are a few recipes to try:

The FDA has separate definitions for many different popular types of cheese. Cheddar cheese is defined as cheese prepared by adding hydrogen peroxide or catalase and lactic acid-producing bacterial culture to create a semisolid mass, in which the whey and curds are separated. The curds are then pressed, salted, and molded to create cheese having minimum 50 percent milkfat and maximum 39 percent moisture. The cheese must be cured at a temperature of at least 35°F for at least 60 days. Low sodium cheddar is a similar product but contains a maximum of 96 milligrams of sodium per pound.