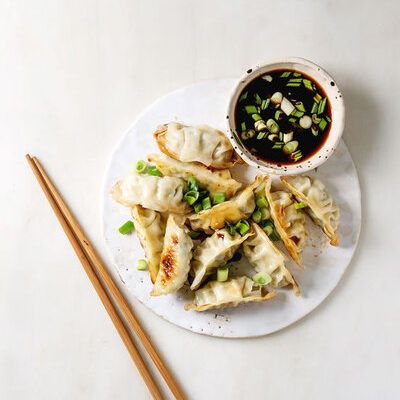 Dumplings are the umbrella term for a classification of foods made from dough wrapped around a filling or without a filling.

While many think of this food as only Chinese potstickers, Italian ravioli and Polish pierogies also fall into this category. Dumplings can be boiled, steamed, or fried and served in soup or with a sauce.

The top 7 most popular brands in the US are:

The oldest known form of dumplings dates back to the Han Dynasty (202 BC-202 AD) in China and was known as iiaozi. Legend has it that a man named Zhang Zhongjian cooked some mutton, wrapped it in dough, and fed it to his neighbors who loved the creation. This food became wildly popular and since their shape resembled the ingot, they were believed to bring prosperity. A bowl of jiaozi, was even found in tombs in Turpan dating back to the Tang Dynasty (618-907).

This dish was also popular in Europe, where some believe that filled dumplings were invented, with its first recipes appearing there in the 15th century. Apicius, the Roman cookery book, includes the first known recipes. However, these recipes were loosely referred to as “gnocchi” and it wasn’t until the 16th century in the United Kingdom that the word dumpling came into existence. Nowadays, people continue to enjoy this food in its many shapes and flavors in cultures across the globe.

As there are several varieties of gyoza and dishes that they are used in, their nutritional values will vary. How this dish is prepared, i.e. boiled, steamed, baked, pan-fried, or deep-fried, will also affect its nutrition.

One boiled pork dumpling can contain 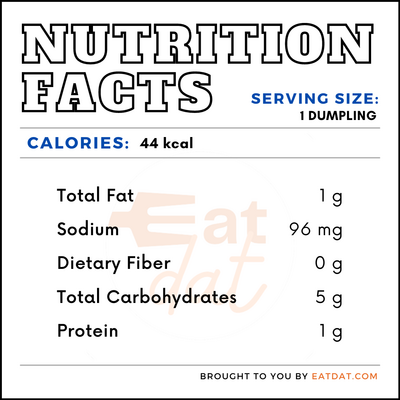 Dietitians note this is not an unhealthy food, however, unless it is a vegetable variety, it may not provide the variety of vitamins and minerals necessary for a healthy and balanced diet. For a more balanced meal, add salad, steamed veggies, or a vegetable soup on the side.

Commercial production involves adding dough paste into an automated machine that rolls and stretches it to the correct thickness. Then, the correct mold is selected, depending on the type of dumpling that is being made. Next, the filling is added and the machine begins molding the dough into the correct shape with the filling already inside. Finally, the dumplings can be cooked, if being made in a restaurant, or packaged, frozen, and stored until ready for sale.

Dumplings are a delicious dish that is celebrated in many cultures around the world. When making this food at home, it’s best to store it properly to ensure it lasts long enough to be enjoyed. If you’ve recently made gyoza, but don’t plan to eat them right away, it’s best to freeze them. To freeze them, place them on a baking tray and make sure that they aren’t touching. Once they are completely frozen, you can deposit them into a freezer-safe container and store them for up to three months.

This centuries-old dish can be adjusted to suit any palate. Here are some popular recipes:

The Food & Drug Administration classifies dumplings as a mixed dish. The organization goes on to narrow down this category as mixed dishes which are “bite-sized” and used as an appetizer before the main meal. The FDA also specifies which label statements and reference amounts producers can use when labeling this food product.