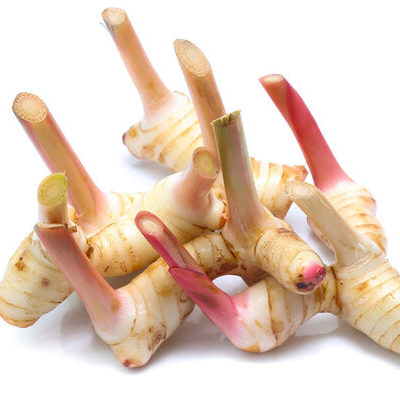 Galangal is the root of four distinctive plants of the Zingiberaceae family, which is closely related to ginger and turmeric. The four different types of galangal are greater galangal, lesser galangal, Chinese ginger, and sand ginger. These roots are an integral part of Southeast Asian cuisine, and are very popular in countries like Malaysia, Thailand, Vietnam, Singapore, Hong Kong, Indonesia, and Laos.

Some major ingredients in Southeast Asian cooking are:

This root vegetable has a long history, and has been growing in the wild for thousands of years in the Eastern Himalayas. It is native to Indonesia, from where it spread to different parts of Asia. The earliest mentions of galangal are from Southern China and Java. The name of this rhizome may have been derived from either the Chinese ‘liangtiang’ (mild ginger) or the Arabic ‘khalanjan’. Eventually, the root made its way to Europe along the trade route in the 9th century, and became popular in medieval Europe. To this day, it is still used in Eastern European cuisine alongside Southeast Asian cuisine.

This vegetable was used in Ayurveda and Traditional Chinese Medicine in ancient times for relief from stomach aches, swelling, and colds. The roots contain antioxidant, antiulcer, anti-inflammatory, anticoagulation, and analgesic properties. It is a rich source of dietary fiber, sodium, iron, and vitamins A & C. Also, it possesses some phytochemicals, such as beta-sitosterol, galangin, emodin, and quercetin. Regular consumption of galangal may help in preventing diseases like cancer, diabetes, ulcers, osteoarthritis, and neurological disorders.

These roots must be planted in spring, when there is no longer any danger of frost, but the rhizomes can be harvested during most of the year. The main producers of galangal are Thailand, Indonesia, and India. Other countries that produce this include Bangladesh, China and Surinam, as well as the Southeast countries of Malaysia, Cambodia, Laos, Vietnam, and Singapore. It must always be kept in the refrigerator,  in airtight bags, for longer shelf life.

This root and lemongrass pair well together and are often combined in many dishes. Here are a few popular recipes to try:

Galangal is a natural seasoning that the FDA  classifies as a spice. It is recognized as safe for its intended use. However, this food is intended for minimal use.