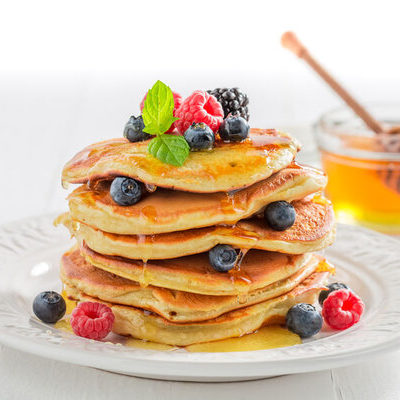 Pancakes are flat and round breakfast food that is made from a batter of flour, eggs, milk, and butter. This batter is poured onto a pan or griddle coated with oil or butter and heated until cooked. Pancakes are commonly eaten with:

Pancakes is so popular that it has its own day, known as Pancake Tuesday, which is celebrated on Shrove Tuesday. In 2019, 162 million Americans said that they had eaten frozen pancakes that year.

The top 10 pancake mixes in the US, according to Good Housekeeping are:

This, or something very similar to them, are also likely to have been part of Otzi the Iceman’s diet over 5,300 years ago. Historians suggest that primitive grinding tools indicate that flour was made as far back as the Stone Age. However, the first written record of pancakes was in Greece around 600 BC. In the 12th century, this dish became a way for people to use up dairy products before lent on Shrove Tuesday. By the middle of the 15th century, pancake races began in the UK and would become a long-standing tradition.

Different European countries have their version of the pancake, ranging from the crêpe in France to the pannenkoeken in the Netherlands. While these versions vary from country to country, European immigrants brought their love for this dish to the American colonies. In 1796, recipes for flapjacks, hoecakes, and the Indian slapjack appeared in Amelia Simmon’s renowned American Cookery book. By the late 19th century, the flapjack became commonly known as the pancake and shortly thereafter maple syrup became a popular topping. In the 1930s, Bisquick was introduced in the US, making cooking pancakes easier for Americans all over the country. 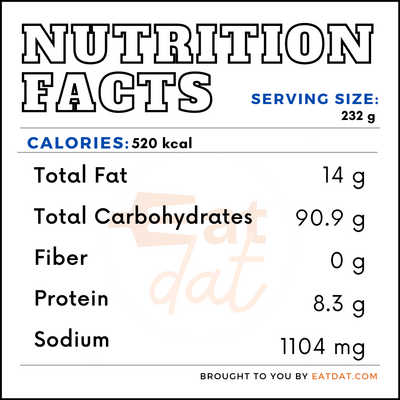 Because this dish is usually consumed with foods such as sausage, bacon, or eggs, it can become a high-fat breakfast. For a healthier option, choose whole wheat flour and fruit as a topping rather than syrup. This dish should be consumed in moderation alongside a good diet and regular exercise.

This classic breakfast dish can be purchased as a dry mix, premade batter, or pre-cooked cakes. Dry mixes combine ingredients such as flour, baking soda, and sugar then are sealed, packaged, and sent to stores. Premade batters go one step further by adding milk, egg, and other stabilizing liquid ingredients. These batters have a shorter shelf life due to the presence of eggs and dairy.

Pre-cooked pancakes are made in food factories using large mixers, conveyor belts, ovens, and freezers designed for commercial production. Ingredients are first mixed to create a batter which is then squeezed out onto the conveyor belt to create the right shape. The conveyor belt helps flatten out the cake while transporting it to the oven to cook. Once it’s cooked, the pancakes are chilled, packaged, and stored in a freezer before being sent to stores.

Paired with sweet toppings and a tasty syrup, a pancake breakfast can make anyone smile. To ensure the full enjoyment of this dish, it’s best to store these cakes properly. If you have leftovers, you should place them in an airtight container. Once sealed, they can be put in the refrigerator and kept there for 2-3 days. In the freezer, well-stored pancakes can safely last up to 3 months.

This hot dish can be enjoyed with any filling or topping. Here are some popular recipes.

The Food & Drug Administration has strict labeling regulations that apply to all processed foods. Pancakes that are commercially produced must correctly label their weight, serving sizes, and ingredients. This food must also be labeled with a dual column to include added ingredients that increase nutritional values after further preparation.

Rupp, Rebecca. “Hot off the Griddle, Here’s the History of Pancakes.” The Long, Surprising History of Pancakes, 1 Mar. 2018, www.nationalgeographic.com/culture/food/the-plate/2014/05/21/hot-off-the-griddle-heres-the-history-of-pancakes/.