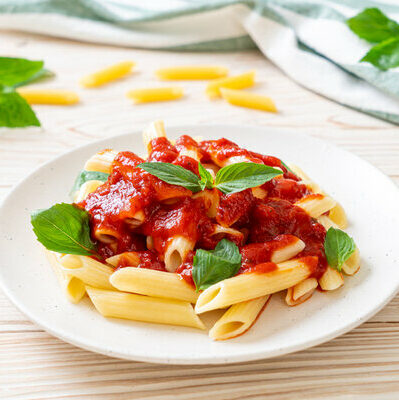 Penne is a type of pasta that is shaped cylindrically with a hole in the middle and the ends cut at angles. There are two types of this pasta, one is smooth (penne lisce) and the other is furrowed (penne rigate). The name of the pasta comes from the Italian ‘penna’ referring to a pen or a feather quill with which people wrote. The pasta was meant to resemble the fountain pen’s steel nibs.

The top 6 most popular penne pasta brands include:

Pasta has a long history. It is an Italian dish but has its origin in Chinese noodles. There is archaeological evidence to suggest that the Chinese were making noodles as far back as 4,000 years ago. However, the penne shape was specifically invented by Giovanni Battista Capurro, a pasta maker from San Martino d’Albano. He invented a machine that cut the pasta in this shape without crushing it. The original penne was orange-colored because it contained saffron. 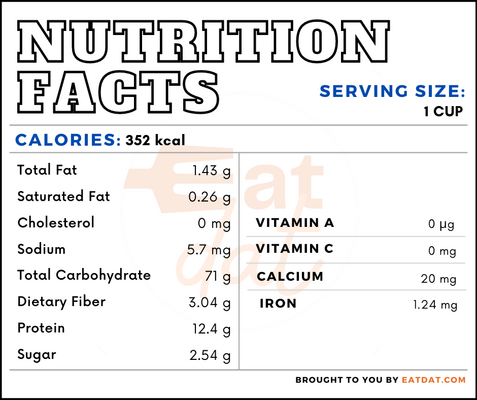 Penne is high in phosphorus and potassium. Also, it contains calcium, magnesium, selenium, and folate in decent quantities. The main ingredient in this pasta is wheat, which must be avoided by those with a gluten allergy. All pasta is made from durum flour, which has a lower glycemic index than regular flour. Cold pasta is a good source of resistant starch. This makes it a dish that can help control obesity, diabetes, and even heart problems. Research shows that regular pasta eaters follow dietary patterns that give them a higher amount of fiber and show an increased HEI (Healthy Eating Index).

Though pasta is extremely popular worldwide, its consumption is highest in Italy, where the per capita consumption of pasta in 2013 was 25.3 kg. Other countries with high pasta consumption are Tunisia, Venezuela, Greece, Switzerland, the United States, Iran, Chile, and Argentina. The largest pasta producers are Italy, the United States, and Brazil. The pasta market continues to grow but producers believe that the future of pasta growth is in developing countries.

Most pasta is produced commercially, though hand-made pasta is also available. Pasta is made by mixing milled wheat, water, eggs, and other optional ingredients.

First, the wheat is mixed with water and kneaded. Then eggs, herbs, and flavoring agents are added to the dough, if required, and kneaded again. This dough is then pressed into sheets and flattened out. After that, it is pasteurized and cut into the penne shape through a specific machine. Finally, it is dried to produce the end product, which is then packaged and sealed.

Pasta has a long shelf life and can be stored successfully anywhere in an airtight container. The USDA recommends pasta be consumed within two years. Fresh pasta must be kept in the refrigerator and consumed within 3 to 4 days.

This is a very popular type of pasta because it can be used with different types of sauces. The cylindrical shape of the pasta ensures that the sauces are able to get inside the pasta and increase the flavor. Additionally, it is a popular pasta for meat-based dishes. It is, however, rare to use penne for light and creamy sauces or with seafood. Here are a few recipes to try:

The FDA classifies pasta under macaroni products, which is defined as food prepared by drying units of dough made from semolina, durum flour, farina, flour, or a combination of these with water and other optional ingredients. These products are regulated strictly in the US for the seasonings, salt, gluten content, disodium phosphate, etc. The finished product must be at least 87% solid. The labeling of these products must include these specifications clearly. The USDA also calls it the mostaccioli and specifies that it must be round-shaped with diagonal cut ends.