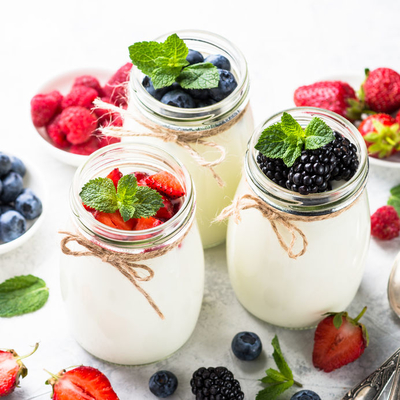 Found in the refrigerated case, yogurt is a food made from fermenting milk with live bacteria.

At the supermarket, you can find yogurt in varieties such as traditional, Greek, low-fat, fruit-flavored, kefir, and non-dairy. Each year, Americans consume more than 300,000 tons of it.

According to Good Housekeeping, the top 8 best supermarket brands of this food are:

Ancient texts have led historians to believe that yogurt was already part of some diets between 10,000 – 5,000 BC. During a time when the people had begun to domesticate animals, the development of this food product likely happened by accident. In 6,000 BC, there is proof of this food’s use in Indian Ayurvedic rituals for its healing properties. Yogurt quickly spread to other regions and by 2,000 BC, much of the population was consuming it. However, the first written record of this food did not occur until 100 BC in the Greek Empire.

Since the 1st century, yogurt has been an indispensable part of Turkish cuisine (this word even stems from the Turkish language.) Legend has it that yogurt also cured a French King’s digestive issues in the 16th century and became popular throughout the country. Immigration, travel, and trade brought this food product to the Americas in the 17th century where it flourished. By the early 20th century, this food had a reputation for promoting health and longer lives, leading to its mass production in Europe. In 1981, the FDA regulated what could and could not be considered yogurt, thereby standardizing this food’s commercial production.

Although this is a popular breakfast or snack food, it is also useful for sweet and savory dishes in the kitchen. This food helps cool down spicy dishes like curry, dress salads, and craft luscious desserts. You can even use it as a marinade as the enzymes in yogurt help break down meat and fish to achieve the perfect tenderness. Add a creamy, tangy flavor to roasted vegetables, dips, fluffy cakes, or crispy toast. This tasty dairy product offers endless possibilities to transform your next meal.

Yogurt is a nutritious food that contains plenty of vitamins and minerals. A 100 g serving of yogurt contains: 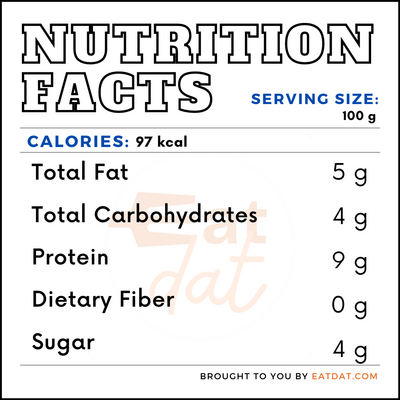 Also, this dairy product contains protein, riboflavin, pantothenic acid, and thiamin. It is probiotic which means that it promotes a healthy gut and good digestion. Studies suggest that the bacteria in this food can help maintain a healthy weight, as well as protect against heart disease and diabetes.

Commercially produced varieties require a combination of powdered milk products and cream. Then, these ingredients are blended and heated to 176°F to pasteurize the mixture. To keep the milk and cream from separating, the yogurt is homogenized in a machine that crushes fat globules. After that, the mixture is fermented in metal tanks at 113°F and live bacteria are added. Once completed, this food is packaged into plastic containers, placed in boxes, and refrigerated until ready for distribution.

As a dairy product, it’s crucial to store this food correctly and follow the best-by date in order to prevent foodborne illnesses. This creamy food should always be kept in an airtight container away from strong odors. Additionally, it’s best to keep it consistently cool, so avoid storing it in the refrigerator door where temperatures will fluctuate. To prevent cross-contamination, don’t eat directly from the container and instead serve yourself in a separate bowl.

You can enjoy yogurt on its own or in a dish with its milky flavor and creamy texture. Here are some popular recipes:

The Food & Drug Administration has strict regulations concerning the standards of milk and cream to be used in yogurt. Before adding any flavors, the FDA requires that this dairy product contain at least 3.25% milkfat and 8.25% percent milk solids not fat. Also, this regulation indicates the labeling protocol that commercial producers of this food should follow. In addition, the FDA only considers foods fermented with two types of bacteria, Lactobacillus bulgaricus and Streptococcus thermophilus, to be yogurt.