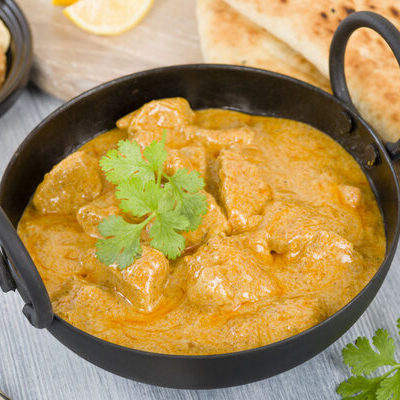 Korma or Qorma is a dish originating in the Indian subcontinent, which consists of meat and/or vegetables cooked in a gravy made of cream or yogurt.

Kormas are typically served with Indian breads such as naan, paratha, roti, chapati, or with rice-based dishes. North Indian and Pakistani kormas are typically milder in taste, while in South India and Sri Lanka, the dish is called kurma and is much spicier.

The most popular varieties of this dish are:

This dish most likely originated in Central Asia, where it is known today as kavurma. Another origin story has it that this food is derived from the Persian dish, koresh. Later on, the Mughals brought it to India, where it became quickly popular. According to some historians, the Indian or Mughlai version was created in the kitchen of Akbar the Great by Mir Bakawal, the master of kitchens and one of the court’s nine gems. The name of the dish was meant to honor the ‘kurma’ tribe of the Rajputs.

This is a rich and high-calorie dish. As it is high in carbohydrates, proteins, and fats, this dish should be consumed in moderation. However, this food contains vitamins A & C, calcium, magnesium, sodium, phosphorus, and potassium in good amounts. Depending on the type and its ingredients, the nutrients may vary.

100 grams of chicken korma gives you: 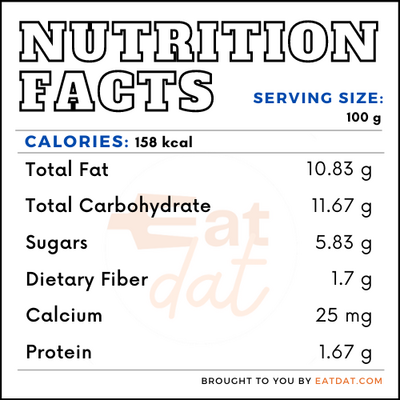 Most restaurants make this food from scratch with fresh ingredients. First, the gravy is made and the ingredients are braised until cooked. Mughlai and Kashmiri versions never contain tomatoes and are prepared with onions, cashews, and whole spices. These varieties are not too hot. The South Indian dish often contains tomato and coconut-based gravy which can be very spicy. In British restaurants, this food is often served mildly sweet.

This is a versatile dish that varies according to region. Here are a few korma recipes:

The gravy for this food contains yogurt and cream. The FDA describes yogurt as the food produced by culturing one or more of the optional dairy ingredients. Cream is described as a cream containing less than 36 percent milkfat and may or may not be pasteurized. South Indian korma using tomatoes must follow regulations for the most frequently consumed raw vegetables.

The same goes for any vegetable added to this food, though some fall under the rarely consumed raw list. Meat grading and quality is regulated by the USDA. However, the FDA defines spice (an integral part of korma) as any aromatic vegetable substance in the whole, broken, or ground form, whose significant function in food is seasoning rather than nutritional.

Petrina Verma Sarkar, What Is Korma?, The Spruce Eats, https://www.thespruceeats.com/indian-korma-definition-1957491