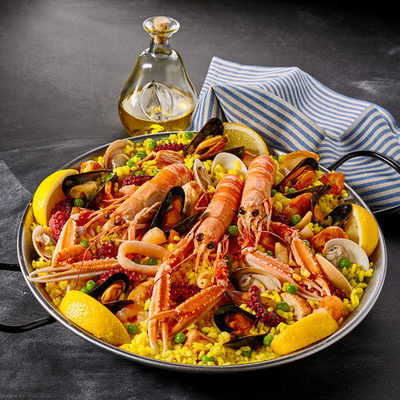 Paella is a rice dish of Spanish origin. The large pan used to cook the dish has the same name, which likely originated from “patella”, the Latin word for pan. This dish is made from a short grain rice called bomba, grown in the region of Valencia, Spain. The ingredients vary according to the type of paella being made.

The most common types are:

Thiis dish has Moorish origins in Spain, though it might date back even earlier than that. There is evidence that the dish is descended through the Persian pilaf and the Indian pulao. One legend states that the servants from the Moorish courts would take home leftovers and arrange them on a bed of rice. This dish first appeared in the Valencian region as food for farmers, who ate the rice straight from the pan with a wooden spoon.  Today, this arroz seco (dry rice) dish remains a landmark of Spanish gastronomy.

A 100 g serving of paella contains: 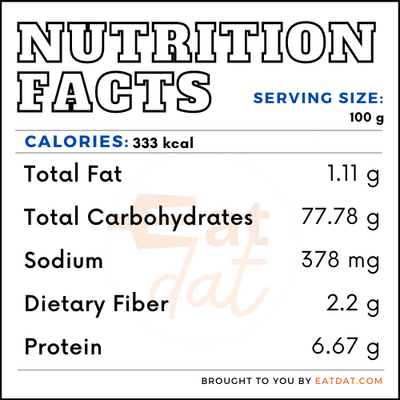 Paella has proteins, such as meat and seafood, as well as vegetables, which provide a host of vitamins, minerals, and dietary fiber. The olive oil provides healthy fats and contains powerful antioxidants in the form of polyphenolic compounds, which have anti-cancer, anti-angiogenic, and anti-inflammatory properties. Also, olive oil contains good amounts of vitamins E and K. Oleic acid makes up 55–80% of olive oil, and keeps cholesterol and blood pressure in check. The saffron has antioxidant, anti-cancer, antinociceptive, anti-diabetic, and anti-inflammatory properties.

Different restaurants have different recipes for this dish and there is a lot of experimentation. The classic version uses rabbit, chicken, snails, fava beans, green beans, and artichokes. First, these ingredients are cooked in olive oil in a paella pan to prepare the sofrito, then salt and tomato sauce are added. After that, water is added and the mixture is left to cook a while longer before adding the rice, which has to be cooked with an al dente effect. Many restaurants no longer use saffron because of its high cost, instead a mixture of cornstarch, salt, and food coloring is used for the signature yellow color.

This dish lends itself to different interpretations. Since it is a dish that traditionally used whatever was available locally, there are today multiple versions of this dish. Here are a few popular recipes:

White rice, also known as enriched rice, falls under the purview of the FDA and covers all forms of milled rice except coated rice. Saffron is categorized as a color additive, and defined as the dried stigma of Crocus sativus L. The USDA regulates the olive oil grades and defines olive oil as the oil obtained solely from the fruit of the olive tree. Seafood falls under the purview of the FWS (Fish and Wildlife Service).