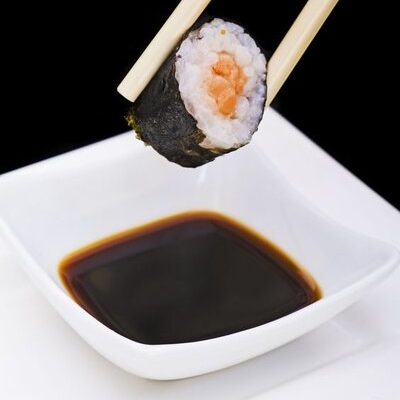 What is Soy Sauce?

Soy sauce is a liquid condiment and seasoning of Chinese origin. It is traditionally made from a fermented paste of soybeans, roasted wheat, brine, and fungi such as Aspergillus oryzae or Aspergillus sojae. The process of making this sauce can take months, or even years, in the case of very high-quality artisanal varieties.

The origin of soy sauce has been traced to the 3rd century in China. This sauce is thought to stem from a sauce called “jan”, which was made by pickling raw materials. Soy sauce remains ubiquitous in the Far East, being made throughout the region in countries like Vietnam, Taiwan, Japan, Thailand, Korea, the Philippines, Indonesia, and Malaysia. Each country has evolved its traditions and produces different varieties of this sauce. Today, it can be found in almost every country on the globe as Asian cuisines have spread far and wide, taking soy sauce with them.

Soy sauce is a multipurpose ingredient that can be added to dishes or used as a condiment. It makes an excellent marinade, and it can also be used in stews or as a sauce for meat and vegetables. Use light soy sauce to garnish dishes without giving them a dark colouring, i.e. when stir-frying chicken or vegetables. Additionally, you can use the dark variety to give color to noodle dishes or fried rice. This sauce’s sweetness makes it perfect as a dipping sauce for dumplings or wonton.

The difference between light and dark soy sauce (Chinese) is that the light type is traditionally made from the first pressing of fermented soybeans. It is generally thinner and lighter in color than the dark sauce. Conversely, the darker version is thicker and sweeter. Furthermore, the dark soy sauce usually contains slightly more sodium than the light version (about 15% more, to be exact). Lastly, the dark flavor is balanced with sweetness and, therefore, not as intensely salty.

According to the USDA, one tablespoon of this sauce contains: 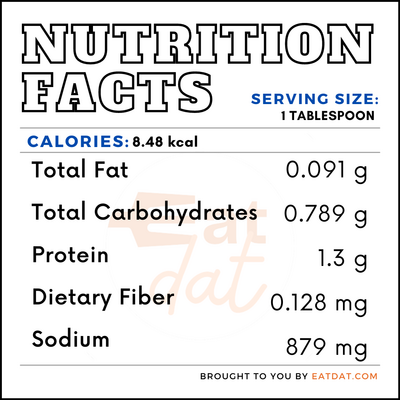 Researchers have discovered some possible health benefits of this sauce, including:

Nonetheless, there are some side effects associated with this sauce. First of all, it is high in sodium. Excess consumption of sodium is linked to increased blood pressure, especially in salt-sensitive individuals. It also may contribute to the risk of heart disease and other diseases, such as stomach cancer. Furthermore, it causes cancer substances known as chloropropanols, which can be produced during food processing, including in the production of this sauce.

Moreover it contains amines, which are natural chemicals found in plants and animals. When eaten in high quantities, a common amine known as histamine can cause toxic effects. Some of the symptoms include headache, sweating, dizziness, itching, rashes, stomach problems, and fluctuating blood pressure. Last but not least, it contains wheat and gluten. Because of the presence of both wheat and gluten, people with wheat allergies or celiac disease could find this to be problematic.

The traditional way to make this sauce has three main steps:

First, carefully selected soybeans and wheat are crushed and blended under controlled conditions. Water is used to mix and boil the mixture until the grains are thoroughly cooked and softened. Then, the mash left to cool to about 80°F (27°C) before adding a proprietary seed fungus (Aspergillus). The mixture is left for three days in big punctured containers to allow for air circulation. The result of this process of soy, wheat, and fungus is known as koji.

Next, the koji is transferred to fermentation tanks, and then mixed with salt and water to produce a mash known as moromi. After that, lactic acid bacteria and yeasts are added to enhance fermentation. The moromi must ferment for several months, during which time the soy and wheat paste turns into a semi-liquid, reddish-brown “mature mash.” This process of fermentation can create over 200 different flavor compounds.

Lastly, after approximately six months of moromi fermentation, the raw soy sauce is separated from the wheat and soy residue cake by pressing it through filtration cloth layers. Then, the liquid that emerges is pasteurized. The pasteurization process prolongs the shelf life of the finished product and forms additional aromatic flavor compounds. The liquid is then bottled, labeled, and stored until ready to be sold.

The major driving factor in the market growth of this sauce is the increase in product demand as a flavor enhancer and seasoning ingredient by food manufacturers, retail food chains, and restaurants. It is expected that the global soy sauce market will increase at a growth rate of 5.9% from 2019 to 2025 to reach $59.13 billion by 2025. This is largely due to the increasing popularity of Chinese cuisine.

Once a bottle of soy sauce is opened, it may be kept with the lid tightly re-sealed in a pantry. Still, this sauce should be kept continuously in the refrigerator for a longer shelf life. If not refrigerated, the quality can decline quicker. However, it depends on how often it is used and where you choose to keep it.

This sauce is a great addition to many dishes. Here are some popular recipes:

The Food & Drug Administration regulates the reference amount consumed per eating occasion for major condiments like soy sauce. The administration also outlines the specific requirements for nutrient claims for ‘light or lite’ in labeling soy sauce. Furthermore, the FDA  released a compliance policy guide for 3-MCPD chemicals contained in this sauce. They suggested that acid-hydrolyzed protein, which forms the 3-MCPD chemical, should be modified during the manufacturing process to reduce the levels of 3-MCPD formed. Studies have shown that 3-MCPD can cause cancer. Hence, the FDA recommends industries ensure that 3-MCPD in acid-hp or sauces not exceed levels ranging from 0.01 parts per million (ppm) to 1 ppm.