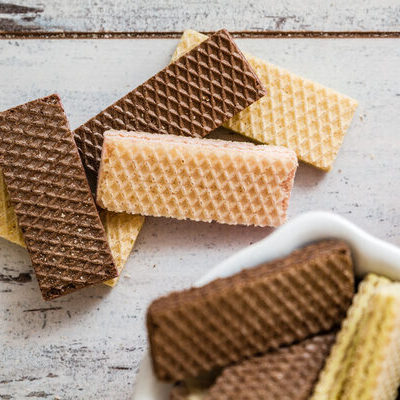 What is a Wafer?

A wafer is a light, sweet, and crispy cookie often used as a garnish or as an ingredient that brings crunch to confections. These cookies are made from flour and water dispersions with a small amount of fat, sugar, salt, and sodium bicarbonate, and then pressed in pre-heated molds.

The top 10 most popular wafer brands are:

The origin of wafers can be traced to ancient Egypt; however, its various names are generally of late Medieval origin. In Latin, ‘oblatao’ and ‘oblatum’ were words used to denote cakes made with unleavened flour and water. The flour and water mixture was worked into thin flat round or square sheets of pastry and baked until crisp using a press. Also, several Renaissance cookbooks have wafer recipes written in them. This cookie is believed to have been available in Paris as early as the 14th century.

In the late Medieval era, these snacks were an essential constituent of the issue de table, the court ceremony after a state meal. This snack remained an important element of the dessert course centuries later. The 1766 French desserts were composed of both curled and flat wafers filled with chocolate and fruit pastes. Today, this cookie is still popular and can be found in a variety of sweet confections.

According to the USDA, a 100g serving of this food contains: 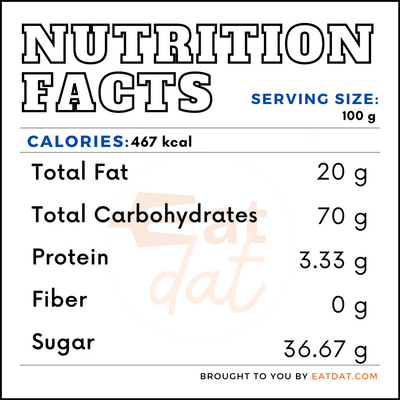 This food has some possible health benefits. It contains crude fibres that can clean the body and aid digestion. Also, it contains a lot of calories in a small bite, making it convenient to carry and suitable to eat when hungry because it gives energy to the body. However, due to its level of sugar, when this food is eaten in excess, it can cause tooth decay. Furthermore, medical personnel and practitioners advise people with certain health conditions like high blood sugar, obesity, and full-blown diabetes to avoid wafers.

There are several ingredients needed in the commercial production of this food. They include: flour, water dispersions (also known as batter), salt, fat, sugar, and sodium bicarbonate, or yeast.

This food is easy to make at home, using the following steps:

When storing this food, jars and plastic bags are recommended. After the wafer is placed in an airtight jar, it should be stored in a cool, dry place to avoid being damaged by heat.

This snack blends well with a variety of foods. Here are a few recipes:

The Food and Drug Administration does not currently have a standard of identity for this food. However, it regulates the reference amount consumed per eating occasion for this snack. The FDA also outlines the factors and general principles they considered in arriving at the calculation. Furthermore, the body provides guidance for industries to follow concerning hazard analysis and risk-based prevention control for foods. This covers everything about the raw materials and ingredients used in preparing this cookie.