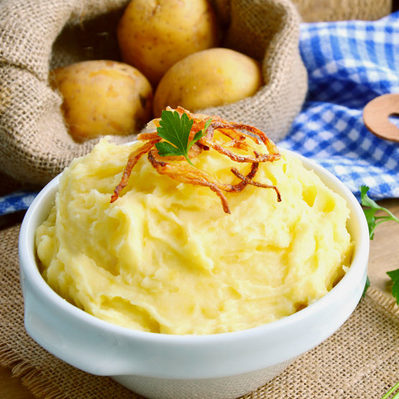 What are mashed potatoes?

Mashed potatoes are a hot dish made from peeled, sliced, boiled, and pureed potatoes. This dish is commonly prepared with milk, butter, salt, and pepper. Different recipes call for the use of garlic, sour cream, and other seasonings, depending on the area where it’s being consumed.

According to Good Housekeeping, the top 7 instant mashed potatoes brands are:

The oldest known potatoes date back to 500 BC when the Inca worshipped them in Peru and Chile. Spanish conquistadores later became acquainted with potatoes on their travels and shipped them back to Spain around 1567. By the 17th century, the potato had made its way to many parts of Europe and was an integral part of the Irish diet. The Irish are credited with creating a dish like mashed potatoes, called colcannon, which included boiled potatoes and cabbage or kale. Irish immigrants would introduce potatoes to North America, where they would slowly become an important crop.

In 1747, the first recipe for mashed potatoes appeared in a British cookbook called, The Art of Cookery. Throughout Europe, potatoes were often viewed as food for animals, but after the Seven Years War that idea changed. In France, where they were at one time banned, potatoes soon transformed into one of the most popular foods. In 1887, two American inventors named Jacob Fitzgerald and William H. Silver would eventually patent a “potato-masher and fruit-crusher”. With this tool, this dish could be consumed everywhere and in time, dehydrated potatoes would make mashed potatoes more accessible.

Potatoes themselves are low-fat and quite nutritious, providing a variety of vitamins and minerals. One cup (100g) of mashed potatoes contains: 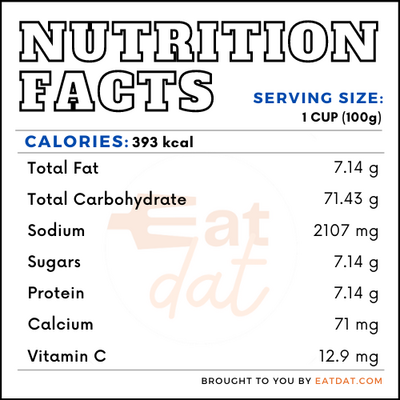 When prepared like mashed potatoes, they are also a good source of fiber and protein. However, this dish does contain a notable amount of sodium and carbohydrates. For a healthier version, you can prepare this dish with low-sodium vegetable broth and nutritional yeast.

For precooked potatoes, the commercial production process begins with the potato itself. Fresh potatoes are cooked before they are fed into a machine that mixes them until they create a puree. This machine uses pressure, speed, and rotations to get the right texture. The puree can then be seasoned with spiced and other ingredients before it’s packed, cooled, and stored.

Dehydrated mashed potatoes have a different process that begins with potato granules. These dry granules are usually combined with fresh potatoes for improved moisture and reduce starch solubility. After that, the mixture is dried and inspected before being packaged, sealed, and stored for shipping.

Fluffy, savory, and often referred to as comfort food, mashed potatoes are a beloved dish for many. Since there are so many recipes for this renowned dish, the key to maximum enjoyment of leftovers is storing them correctly. To keep mashed potatoes fresh in the refrigerator, tightly cover the container or store them in a zip lock bag. If the potatoes don’t oxidize or become sour, they’ll be safe for 2-3 days. Alternatively, you can scoop leftovers onto a tray, freeze them, then store them in a bag for longer storage.

This hot dish makes a great side or starter for a variety of meals. Here are some popular recipes.

The Food & Drug Administration has several regulations related to this dish. One regulation describes that the FDA seeks to decrease the sodium levels in processed mashed potatoes. When it comes to frozen meals, the FDA required that any meals include food by the descending weight. As mashed potatoes are commonly included in frozen dinners, they are also subject to this regulation.