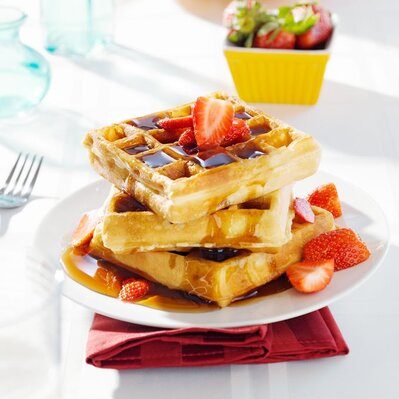 Waffles are a sweet dish made from a batter of flour, water, oil, and eggs. They are commonly topped with flavored syrups, whipped cream, caramel or chocolate sauces, and ice cream. Toppings can be versatile and vary from place to place, as well as from person to person.

Some common types of waffles include:

This sweet dish is of Belgian origin and date back to the Middle Ages. Traditionally, they were made of barley or oats, and sold as street food snacks outside churches. The dish may have been inspired by the Greek obleios, which was also made by pressing dough between two hot metal plates. Christianity adopted the dish, and vendors began selling them outside churches with different motifs on them.

One legend connected to the honeycomb pattern says that it was developed when a knight accidentally sat on an oatcake still dressed in armor. This left a grid pattern on the bread, which resembled a honeycomb. The word ‘waffle’ comes from the Dutch word for ‘honeycomb’. In the 1600s, the dish travelled to the US with the colonist settlers, and was adapted to suit local conditions and resources. 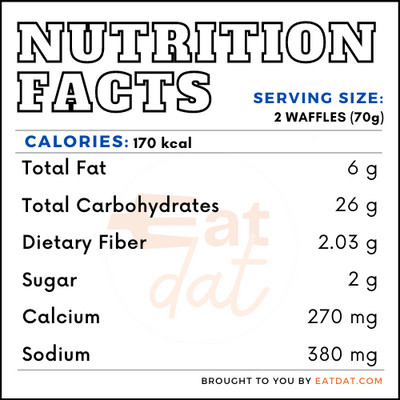 Waffles are high in refined flour and other refined carbohydrates, unhealthy fats, and sodium. Overconsumption of this food can have negative health consequences. However, they do provide essential vitamins and minerals including calcium, iron, phosphorus, thiamine, riboflavin, niacin, vitamin B-12, folate and vitamin A.

Commercially produced waffles are prepared using a waffle maker made from cast iron or stainless steel. To prepare, first yeast is mixed into warm milk to be activated. Then, butter, sugar, salt, and eggs are mixed in a bowl, and flour is added to it. Next, this mixture is kneaded and fermented for about an hour, then pearl sugar is added and the dough is kneaded in again. After that, the dough is balled up and placed in the waffle iron and cooked. The Liège waffle variety may be served without toppings. Other waffle dishes follow roughly the same recipe with minor variations.

This comes in different varieties and shapes. They may also have different toppings. Here are a popular few recipes to try:

The USDA regulates the production, sale, and packaging of waffles in all its different forms. This food product falls under the greater category of griddle breads.

Gerard Paul, The History of Waffles – The Perfect Breakfast or Dessert, ManyEats, https://manyeats.com/history-of-waffles/