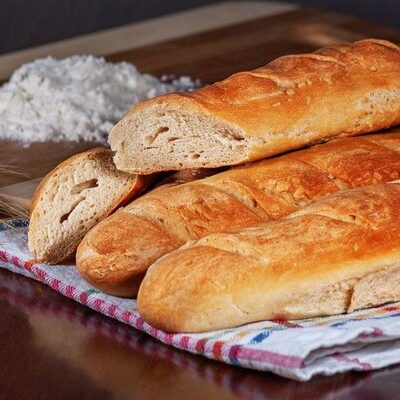 What is a French Baguette?

A French baguette is a long loaf of bread with a thin, crunchy crust that is traditionally produced in France. This bread is made using a basic lean dough and can range from 25 to 40 inches in length. There are several variations of this bread with baguettes ordinaires and baguettes de tradition being the most popular.

Some common toppings or fillings for French baguettes include:

Origin of the French baguette

This bread, as it’s known today, dates back to the 19th century with several different theories surrounding its creation. Some theories state this bread was the product of the French Revolution while others say that it was inspired by Viennese bread and some even argue that Napoleon Bonaparte may have invented it. However, the first wand-shaped bread appeared in France around the 18th century and their length was much longer than that of modern baguettes. There are written accounts from 1862 that describe loaves of bread which were “six feet long that looked like crowbars”.

By the 1920s, the government limited the hours that bakeries could remain open, leading to shorter baguettes. These modern baguettes could be found in bakeries across France. In the 1950s, bakers began to use pre-made or frozen dough and molds to speed up their baguette production. By the 1990s, this had become the norm but by 1993, a law was passed stating that baguette de tradition had to be made by hand, sold in the same place it was baked, and could only use water, wheat flour, yeast, and salt. Today, the French baguette remains one of the most popular types of bread around the world and is a symbol of French cuisine.

French baguettes are consumed and used in the kitchen in a multitude of ways. Most commonly, they are used as a base for sweet and savory toppings. However, they can also be sliced to make toast, crostini, and bread pudding. They also make delicious sandwiches filled with French charcuterie (sliced meats) and cheese or Vietnamese Bánh Mì. It’s also common to rip this bread into pieces for children to enjoy with chocolate.

A 57g serving size of a French baguette contains: 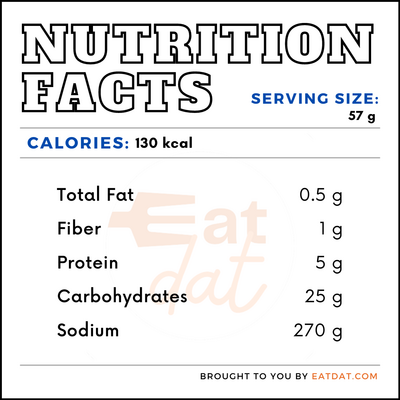 However, this bread is a low-fat food and even offers nutrients such as iron, zinc, some B vitamins, and folate. French baguettes are more nutritious than white bread and provide nutrients that are linked to a decreased risk of cardiovascular disease. However, there are a lot of carbohydrates in French baguettes, so anyone who is watching their blood sugar may want to consume them in moderation.

The commercial production of French baguettes begins with first weighing out the dry ingredients and then mixing them in a large bowl. Next, the poolish, or liquid sponge, is added to the dough before it is mixed again and cut into size for individual baguettes. Then, the dough is rolled into balls and proofed for 3-10 minutes before it’s molded into its famous cylindrical shape. Finally, the bread is proofed again for 60-90 minutes at a temperature of 80°F (26.7oC) then scored or cut on top. The French baguettes are steam baked for 5 minutes before they are baked in a tunnel or rack oven. They are cooled on conveyor belts or wire racks after they come out of the oven and packaged.

This culinary classic is well-known for its crunchy exterior and soft, warm interior. While there’s nothing quite like eating a French baguette that’s still hot from the oven, it’s possible to store this food for later consumption. However, to keep this bread from getting too hard and becoming inedible, you should place it in an airtight bag to lock in moisture. It’s also possible to freeze French baguettes until hours before you need them, just remember to allow them time to defrost before using. Stale baguettes can still be enjoyed as Melba toasts, croutons, stuffing, bread pudding, or crostini, so don’t be too quick to toss them out.

This pastry classic can be incorporated into a variety of dishes. Here are some popular recipes:

The Food & Drug Administrations classifies all types of bread as bakery products. The FDA goes on to define bread as “food produced by baking mixed yeast-leavened dough prepared with wheat”. For any bakery product to be considered bread, it must have at least 62 percent solids. French baguettes must also adhere to these standards from the FDA.