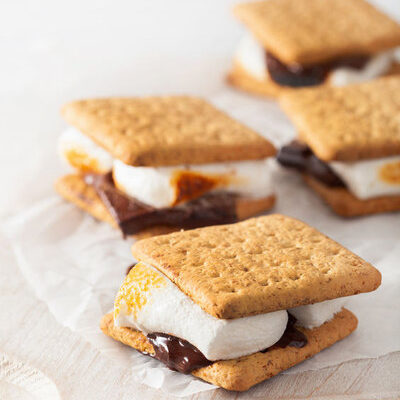 Marshmallows are sweet snacks made primarily from sugar, corn syrup, water, and gelatin. They have a soft, light, elastic, and fluffy texture. Most marshmallows are white in color, but are also dyed with food coloring to provide a variety of colors.

The top five most popular marshmallow brands on the market are:

Marshmallows have their origin in Ancient Egypt, where noble people consumed the sap of the mallow plant with honey. The sap comes from the root of the marshmallow plant, which usually grew on salt marshes and river banks. The Greeks and Romans utilized the sap from this plant as a remedy for sore throats. The snack was more of a medicinal treat in the beginning; however, in the mid-18th century marshmallows became a sweet snack in France. Producers covered the sap with egg whites and sugar to sell it as a bar.

This spike in the popularity of this sweet treat caused producers to search for other alternatives, as marshmallow roots became scarce. Therefore, confectionery producers replaced the sap with gelatin and also figured out a way to make marshmallows faster. In the late 1800s, they used the “starch mogul” system instead of the hand production method. Later on, a man named Alex Doumak performed experiments on several ways of making marshmallows and discovered the “extrusion process.” The technique involved passing the mix through long tubes and slicing them into similar pieces, giving them their iconic shape.

A 100g serving of this candy contains:

This treat has some health benefits, as well. The gelatin in it contains amino acids that maintain and build body tissues. Also, it may also be capable of stimulating collagen production and improving the appearance of skin. However, marshmallows contain added sugar. If this treat is consumed in excess, it can contribute to obesity, diabetes, and heart disease.

The commercial production involves mixing corn syrup, starch, sugar, and water with gelatin. This candy has a lower density due to the incorporation of air. It can either be classified as “grained” or “non-grained. ” If the treat is grained, a small percentage of the sugar will crystallize, thereby producing a more dense and finer marshmallow. If the candy is non-grained, the sugar will not crystalize, thereby creating a chewy candy. The volume of air introduced to this treat during production affects its texture and appearance. Therefore, commercial producers use aerating agents to speed the formation of air bubbles in the candy.

When storing this candy, take care to place it in a zip lock bag or an airtight container. Then, place the bag or container in the refrigerator. This candy can last for 2 to 3 months in the fridge. When it comes to the food’s shelf life, it’s recommendable to follow the ‘best by’ date printed on the packaging.

This sweet treat can liven up a plethora of dishes. Five recipes you can try include:

The Food and Drug Administration has regulations that specify the reference amount of marshmallow consumed per eating occasion. The reference amount for this treat is 30g. The FDA also has a list of commonly used food ingredients, such as additives, which may be used in marshmallows and other sweet treats.